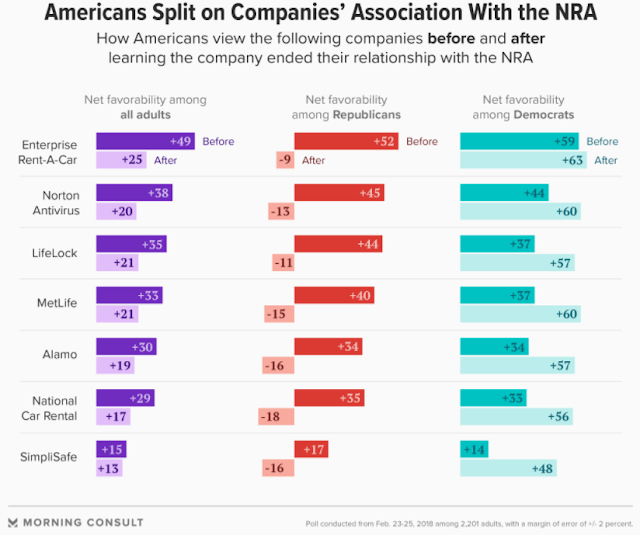 After the Parkland, Fla., high school shooting, several prominent companies ended their businesses relationships with the National Rifle Association — and some are facing backlash in public opinion, according to a new poll.

A Morning Consult survey of 2,201 U.S. adults conducted Feb. 23-25 found increases in negative views of businesses that severed ties with the NRA after consumers learned of them. The poll’s margin of error is plus or minus 2 percentage points.

MetLife Inc., the insurance giant that ended a discount for NRA members last week, had a 45 percent favorable rating, compared to a 12 percent unfavorable rating, before survey participants were informed of that move. After learning of it, respondents with an unfavorable view of the company doubled to 24 percent, while its favorability rating was unchanged.

Among Republicans, the firm’s favorability ratings flipped after participants learned of the decision regarding the NRA. Beforehand, 50 percent of Republicans said they had a favorable view of the company, compared to 10 percent with an unfavorable view. After being informed of MetLife’s decision, the ratings changed to 29 percent favorable and 44 percent unfavorable.