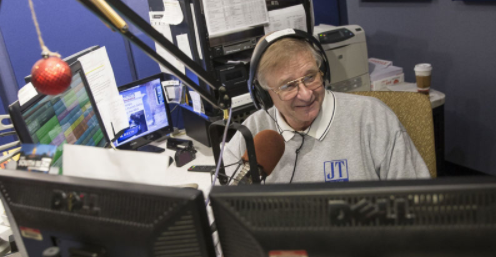 After 42 years of broadcasting in the community, Jon Thompson, of 'JT in the Morning,' retired. His last morning show on SportsRadio WSBT 960 AM / W241AD 96.1 FM ended Friday at 9 a.m.

“God bless you Michiana. I love you, I am so appreciative of your being tuned in, and we’ll be talking to you down the road.”

With that tearful sign-off Friday morning, the red “On air” sign above the WSBT studio door turned off for Jon Thompson — or "JT in the Morning,” as listeners have known him — ending more than four decades on local radio.

According to The Tribune, Thompson learned Monday that WSBT’s owner, Mid-West Family Broadcasting, decided to replace his program with ESPN’s morning sports show and that Friday would be his final show.

“I believe the people at WSBT made this decision with a heavy heart with regard to me,” he said in a telephone interview earlier this week.

He added that, at age 70, he thought he would probably retire in another year or two, which he would have preferred.

For Thompson, WSBT’s programming change reflects a trend in the radio industry that listeners have accepted, even if they miss the presence of local personalities.

“It’s gotten to the point where almost all AM stations are syndicated,” he said. “From a business standpoint, I believe syndication is what is helping many stations survive, and people have accepted syndication.”

Thompson got his first job in radio in 1971 at a station in New Hampshire. Over the next four years, he worked at stations in Worcester, Mass.; Greeley, Colo.; and Lebanon, Pa., where he had his longest stint, from 1973 to 1975, before coming to South Bend.

Thompson started work at WSBT on Dec. 29, 1975, after he answered an ad for a morning show host in Broadcasting magazine.

"People have been very gracious in allowing me to come into their homes and help them get their day started, and they've helped me get my day started, so it's really a two-way package."

Thompson said he looks forward to spending more time with his wife, Marilyn, and they plan to travel. He also said he plans to play more golf – and sleep in.
Posted 4:00:00 AM