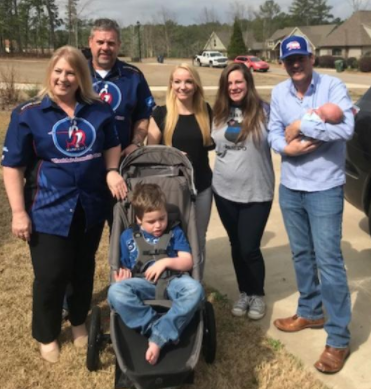 The widow of a fallen officer from Locust Grove, Georgia, was surprised last week by Country WKHX Kicks 101.5, and Carl Black Buick in Kennesaw, when they presented her with a customized handicap accessible SUV for her family.

On February 9th, Police Officer Chase Maddox, a five year veteran of the Locust Grove police force, tragically lost his life in the line of duty. He left behind his pregnant wife, Alex Maddox, and their special needs son Braydin, 7.  Alex delivered their newborn son, Brodie, just days later in their hometown of Griffin.

When Cadillac Jack and Ali Mac, hosts of Mornings on Kicks 101.5, reported the news story and discovered of the Maddox family’s need for a handicapped accessible vehicle, they contacted long time business partner and personal friend, T. Scott Jordan, General Manager of Carl Black Buick in Kennesaw, to see if they could help. Cadillac Jack says, “T. Scott literally called back within 60 seconds and said they could do it - they would donate a vehicle for the Maddox family.”

With the help of R&R Mobility in Conyers, the fully loaded Carl Black Buick Enclave was customized to be handicapped accessible exactly to the family’s needs.

On Thursday afternoon, Cadillac Jack and Ali Mac traveled to Griffin and delivered the vehicle to Alex and her family. Alex expressed her gratitude for the generous donation that would make things a little easier for her family during this difficult time.

“When I was holding Brodie, it was like I was holding a piece of Officer Maddox.  And as a father, looking at this newborn baby, I was heartbroken that he’ll never meet his father,” said Cadillac Jack after his visit with the family.

The family has set also up a bank account to receive donations for Officer Maddox's wife and children. You may drop off donations at any United Community Bank location and ask that it be deposited into “The Maddox Family Fund." There is no need to provide an account number.

A GoFundMe account has been set up for the family as well.
Posted 3:03:00 AM