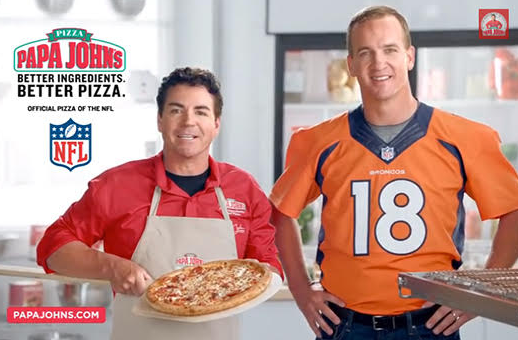 Papa John's International is ending its sponsorship of the National Football League after a decline in TV ratings and a controversy over player protests.

Rather than serving as the league's official pizza, the company said on Tuesday that it will focus on doing marketing with 22 specific NFL teams. According to AdAge, The move is part of an attempt to overhaul Papa John's marketing under a new CEO, who took the helm last month, and a new chief marketing officer, who joined the chain last year.

The NFL partnership has been strained since Papa John's founder John Schnatter slammed the league in November, saying that declining ratings had hurt sales. He also said that Commissioner Roger Goodell mishandled a controversy over NFL players kneeling during the national anthem.

Papa John's had been the NFL's official pizza sponsor since 2010 and had renewed the deal in 2016.

The sponsorship gave the nation's 4th-largest pizza chain the ability to use NFL logos and trademarks in its marketing. Before last year, Papa John's and Schnatter himself embraced the ties to the sport, for example often showcasing Peyton Manning and J.J. Watt in ads.

The sponsorship's demise comes during a slump at the pizza chain. The company posted a 3.9 percent decline in fourth-quarter North American same-store sales. Papa John's pledged to reverse the decline by improving its media and creative partnerships, updating its loyalty program, and hiring a new public relations partner.
Posted 3:15:00 AM