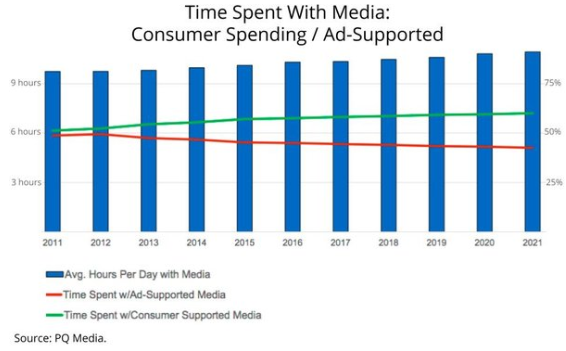 Even as consumer time spent with media continues to expand -- inching up 0.3% last year -- the percentage of time consumers spend with ad-supported media continues to decline, according to MediaPost citing the 2018 edition of an annual report tracking and forecasting consumer media usage.

The study, which was previewed by Research Intelligencer, comes as a major industry futurist -- Publicis’ Rishad Tobaccowala -- predicts that ad-supported media exposure is about to experience a cliff effect, declining as much as 30% over the next five years as consumers shift their attention to non-ad-supported media.

The good news is that the total amount of time Americans spent consuming media rose to 70.7 hours per week last year. The bad news for Madison Avenue is that the share of time spent with ad-supported media fell to 44.4%, its lowest point ever.

The report, published by PQ Media, projects that ad-supported media’s share of consumer time will fall to 42.5% by 2021, as consumers shift more of their time and attention to media that has little or no advertising in it -- mainly subscription services for consuming video, audio and other forms of media.