Comcast Corp, the biggest cable operator in the United States, offered to pay $31 billion to buy Sky, the European pay-TV group that Rupert Murdoch’s Fox has already agreed to buy.

Reuters reports Comcast, which owns NBC and Universal Pictures, said it was offering 12.50 pounds per share, significantly higher than the 10.75 pounds per share agreed by Fox.

The proposed offer pits Comcast against Murdoch, the 86-year-old media tycoon who helped to launch Sky in Britain, and also against Walt Disney which has agreed to buy a string of assets from Fox once the deal is done, including Sky.

“We would like to own the whole of Sky and we will be looking to acquire over 50 percent of the Sky shares,” Comcast CEO Brian L. Roberts said in a statement.

“Sky and Comcast are a perfect fit: we are both leaders in creating and distributing content,” Roberts said on a conference call. “Innovation is at the heart of what we do: by combining the two companies we create significant opportunities for growth.”

Sky’s chairman is Murdoch’s son James, who is the chief executive of 21st Century Fox, so Comcast will have to gain the support of the independent shareholders for its better offer if it does not make a hostile bid. 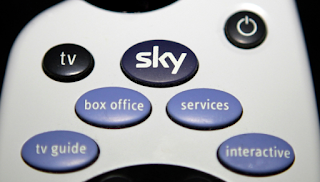 Fox agreed to buy the 61 percent of Sky it did not already own in December 2016 but the takeover has been repeatedly held up by regulatory concerns that Murdoch controls too much media in Britain.

Some Sky shareholders have also started to complain that the offer was too low. In December, hedge fund manager Crispin Odey argued that Sky was being sold too cheaply.

Britain’s competition regulator said in January that Murdoch’s planned takeover should be blocked unless a way was found to prevent him from influencing the network’s news operation, Sky News.

Comcast said it had only a minimal presence in the British media market and did not see any plurality concerns over its proposal.

Comcast said it recognized that Sky News was an “invaluable part of the UK news landscape” and it intended to maintain Sky News’ existing brand and culture, as well as its strong track record for high-quality impartial news and adherence to broadcasting standards.
Posted 3:49:00 AM