Pizza Hut Scores With The NFL 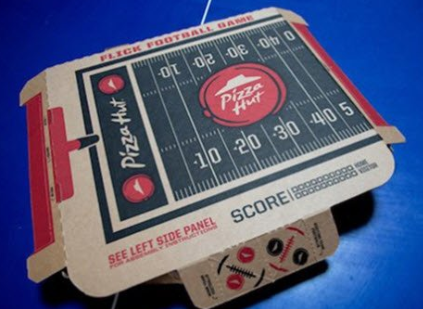 Less than a day after Papa John’s announced that it had prematurely ended its seven-year official pizza brand sponsorship of the National Football League, Pizza Hut has confirmed the rumors that it is stepping into that void, announcing its own multi-year deal with the NFL.

The financial terms of the Pizza Hut deal were not disclosed, according to MediaPost.

"Pizza Hut's chief marketing officer, Zipporah Allen, said the company will engage consumers on the deal through new products and packaging, the company's loyalty program and a continued push into beer delivery," reports ESPN.com. "The brand started a pilot program to deliver alcohol into homes in Phoenix late last year." In addition, the partnership could eventually involve mobile elements, given that 70% of PH's online orders are placed through mobile, the site adds.

According to a 2013 survey, 37 percent of Americans who watch football like to eat pizza while they’re doing it. And, using the statistic of 16.5 million people who tuned in to watch the average NFL game in 2016, that roughly adds up to about 6 million people who have pizza on the mind while watching a game.

That’s a lot of pizza, according to AdWeek. And, no doubt, it’s also among the motivators behind Pizza Hut’s decision to sign on as official pizza sponsor of the NFL.

“NFL stadiums are packed every week, but tens of millions of fans are also watching the game at home,” Pizza Hut U.S. president Artie Starrs said on the Pizza Hut blog. “We have an unmatched ability to bring those fans closer to the sport, thanks to the power of our 7,500 restaurants and 150,000 football-crazed team members. The capacity for what’s possible is endless.”