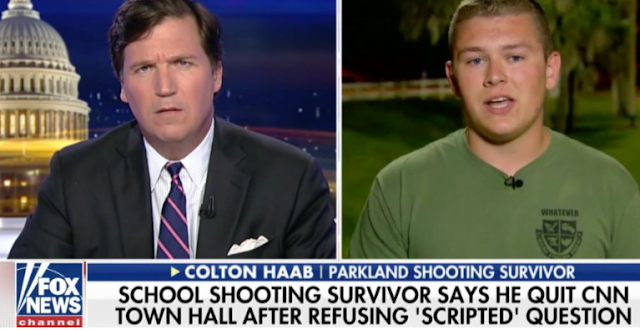 The family of Colton Haab, a student at the Florida high school where a gunman killed 17 people last week, provided a doctored email to media outlets in order to defend Haab's claims that CNN rewrote a question for him to ask at the network's Wednesday town-hall-style event on school shootings.

Haab told the Fox News host Tucker Carlson on Thursday night that CNN executive producer Carrie Stevenson gave him a question to deliver to lawmakers and told him to "stick to the script."

But CNN says there is "absolutely no truth" to Colton's claims, which he first made on a Miami TV-news station.

"In my interview with CNN, I had talked about arming the teachers, if they were willing to arm themselves in the school, to carry on campus," Haab told Carlson. "And they had — she had taken that, of what I had briefed on, and actually wrote that question out for me."

CNN says that Stevenson and Colton agreed on one question that Colton would ask, but that Haab's father, Glenn Haab, intervened, sending a lengthy speech (see below) that he wanted Colton to read, which included three questions for lawmakers.

On Friday afternoon, Fox News and the HuffPost reached out to CNN to verify emails between the Haabs and Stevenson that they received from Colton.

A CNN source provided Colton's version of the emails, as well as their versions of all of the communications between the Haabs and CNN, to Business Insider.