Tesla had first demonstrated wireless transmissions during his high frequency and potential lecture of 1891. Just days before the St Louis presentation, Tesla addressed the Franklin Institute in Philadelphia, on February 23, 1893, describing in detail the principles of early radio communication.

Tesla presented the fundamentals of radio in 1893 during his public presentation, "On Light and Other High Frequency Phenomena." Afterward, the principle of radio communication -- sending signals through space to receivers -- was widely publicized from Tesla's experiments and demonstrations.

Even before the development of the vacuum tube, Tesla’s descriptions contained all the elements that were later incorporated into radio systems. He initially experimented with magnetic receivers, unlike the coherers (detecting devices consisting of tubes filled with iron filings which had been invented by Temistocle Calzecchi-Onesti in 1884) used by Guglielmo Marconi and other early experimenters.

Radio offers another example of Tesla’s work receiving minimal or no long-term public acknowledgement. While Marconi is often credited with inventing the radio, this presentation by Tesla was recalled in courts several years later in invalidating Marconi patents.

Indeed, it, among other facts, pushed the United States Supreme Court in the 1943 case of Marconi Wireless Telegraph Company of America vs the United States to state that "it is now held that in the important advance upon his basic patent Marconi did nothing that had not already been seen and disclosed."

To be true, what Tesla demonstrated had more scientific interest than practical use. However, he believed that by taking the “Tesla oscillator,” grounding one side of it and connecting the other to an insulated body of large surface, it would be possible to transmit electric oscillations to a great distance and to communicate intelligence in this way to other oscillators.

In 1898 at the Electrical Exhibition in New York, Tesla would successfully demonstrate a radio-controlled boat. For that work, he was awarded US patent No. 613,809 for a "Method of and Apparatus for Controlling Mechanism of Moving Vessels or Vehicles."

Between 1895 and 1897, Tesla received wireless signals transmitted via short distances in his lectures. He transmitted over medium ranges during presentations made between 1897 and the 1910.

➦In 1914...beloved sportscaster Harry Caray was born Harry Carabina in St. Louis,  where he began his big league career as voice of baseball’s St. Louis Cardinals for 24 years. He worked briefly for the Oakland A’s before moving to Chicago, where he was voice of the White Sox for a decade.  In 1982 he began 15 years of calling the Cubs games on superstation WGN which won him a national following.

He suffered a fatal heart attack after a series of strokes Feb 18, 1998 & died just days before his 84th birthday.

➦In 1932...one of daytime radio’s comedic gems Easy Aces written by and starring Goodman Ace with his ditzy wife Jane, moved from local Chicago exposure to the full CBS network, three times a week. It would delight audiences on that schedule for much of the next 15 years.

➦In 1949...WFLN 95.7 FM signed on in Philadelphia. 95.7 FM was founded by Philadelphia civic leaders as a fine arts station, which signed on as WFLN at 5PM on March 14, 1949. In the early years, programming was heard in the evening hours only. In 1956, an AM operation was added, which mostly simulcasted the FM.

WFLN, which stood for "Franklin Broadcasting" was the first stand-alone (not co-owned with a local AM) station in Philadelphia. For nearly 50 years, the station's studios, transmitter and self-supporting tower were located at 8200 Ridge Pike, at the western edge of Roxborough, a few miles apart from the cluster of other antennas in Roxborough. From the late 1960s until the late 1980s, WFLN also maintained a small office in center city Philadelphia on the Benjamin Franklin Parkway near 17th Street. This facility was used as a sales office and small studio where host Ralph Collier would do live and recorded interviews. Until about 2004, remnants of white plastic letters spelling "WFLN" could be observed on a low brick wall at the abandoned location, but they have since disintegrated.

Station leadership was carried out by the Smith and Green families. Programming consisted of classical music along with a number of short "feature" programs. Little emphasis was placed on making the station profitable, and most years it simply broke even.

WJZ changed its call letters to WABC, after the FCC approved ABC's merger with United Paramount Theatres, Paramount Pictures' movie theatre chain, which was divested under government order. WJZ-FM (95.5) and WJZ-TV (Channel 7) also changed to WABC-FM and WABC-TV, respectively, on the same day.

➦In 1954...At the KHJ Studios in Hollywood, Frank Sinatra recorded "Three Coins In The Fountain."

➦In 2007...veteran radio & TV character actor Eddie Firestone died of heart & respiratory failure at age 86.  His career began in scores of radio series, including the title role in “That Brewster Boy,” plus supporting roles on “Hawthorne House,””One Man’s Family” and “Let George Do It,” then went on to hundreds of appearances over 40 years of episodic TV, from “Bonanza” and “Perry Mason” to “Gunsmoke” and “Dallas.”

➦In 2016...Former radio programmer, consultant and station owners John Harlan Rook died.  He was most known for his tenure in Chicago. Under his guidance in the 1960s, 50,000-watt ABC-owned WLS became the highest rated station in the Chicago metropolitan area, known as one of the greatest Top 40 stations in America. After leaving WLS to form a radio consultancy in 1970, WLS' rival, WCFL-AM, beat WLS in the ratings after retaining Rook's services. Throughout his programming career, Rook won numerous national radio awards and was repeatedly singled out for his ability to pick hit records. He would later own his own radio stations before founding the Hit Radio Hall of Fame,[14] the only foundation that bestows awards on popular performers based upon the votes of the general public.

After jobs playing records at KASL in Newcastle, Wyoming; KOBH in Hot Springs, South Dakota; and KALL in Salt Lake City, Rook programmed KTLN in Denver, where his success led to ABC hiring him to be program director at KQV in Pittsburgh. KQV, owned by ABC, had initial success with the Top 40 format, but was floundering prior to Rook's arrival.

Rook quickly became known for his musical instincts, repeatedly breaking hit records before the rest of the country aired them. He was early on recognizing The Beatles and developed an inside track to their future releases. Under Rook, KQV played world-premieres of new Beatles songs before sending them to other stations owned by ABC in New York City and Chicago. In 1965, KQV had an eight-day start on the rest of the country with “Yes It Is” and “Ticket To Ride”.  KQV also was known nationally for its record-breaking concerts.

In 1967, due to KQV’s success under Rook, ABC appointed him as program director of WLS in Chicago, which, like KQV when Rook arrived, was a major station facing increasingly successful competition. In 1964, WLS had a 34% share of the night time audience while competitor WCFL had 3%. At the time of Rook's arrival in 1967, WLS was down to 16%, virtually tied with WCFL’s 15%.

By 1968, under Rook, WLS again led the market and WLS was named Station of the Year at the Gavin Convention. WLS programmed by Rook became such a legendary Top 40 station that program directors and personalities including Rush Limbaugh and David Letterman cite its programming and personalities under Rook as a major inspiration. Popular disc jockey Larry Lujack, who worked for Rook first at WLS and later at WCFL, considered Rook to be “The greatest program director of our generation.” 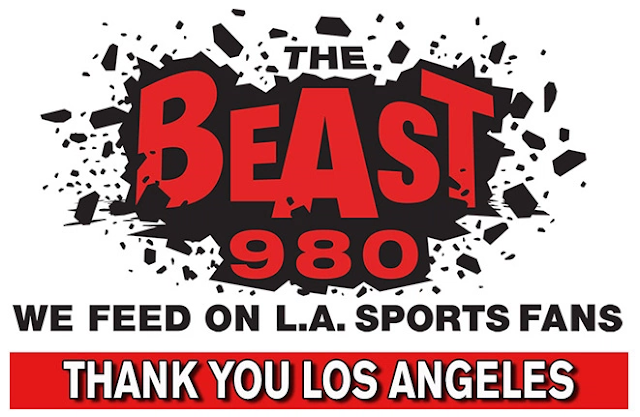 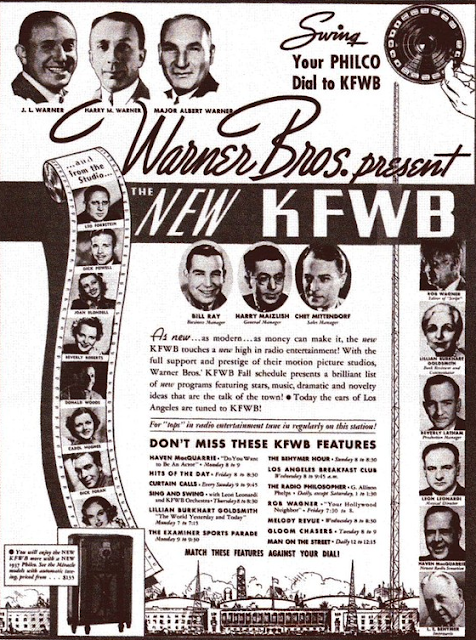 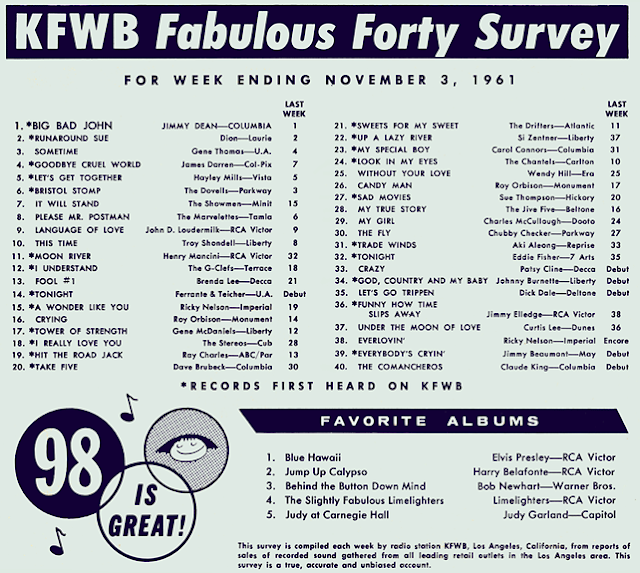 On November 2, 2011, CBS Radio placed KFWB into a trust headed by Diane Sutter, under the name The KFWB Asset Trust.
Posted 2:59:00 AM