How 'Bout Them Cowboys?

Even as much of the country rallied around the Super Bowl champion New Orleans Saints last year, it seems that the Dallas Cowboys are still America’s team.

According to The Nielsen Sports Media Exposure Index, which measures media exposure on TV and online, the Cowboys were still the most popular NFL team in America last season. Jerry Jones’s franchise earned the top indexed score of 100, far surpassing the runner-up Pittsburgh Steelers who finished with an index of 81. 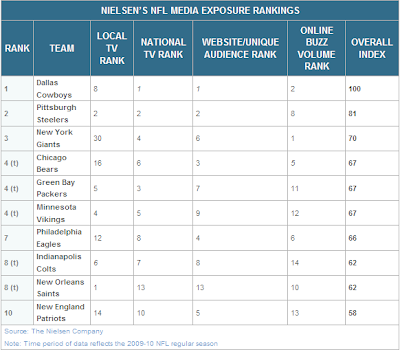 The Cowboys’ top ranking was boosted by first-place showings in two of the four categories tallied by Nielsen: gross audience during nationally televised games and monthly unique audience to the team web site. The other two categories – local team ratings and total buzz volume – were captured by the Saints and New York Giants, respectively.

Dallas has held the top two spots in each of the last two years. The Steelers moved up from third to second, swapping places with the Giants. The Minnesota Vikings, aided no doubt by the presence and performance of legendary QB Brett Favre, climbed from 13th place in 2008 to a tie for 4th in the 2009 regular season ranking. The Washington Redskins, meanwhile, dropped from 5th in 2008 to 11th in 2009.

NFC teams dominated the 2009 rankings. Seven of the top 10 teams represented the conference, while the Steelers, Colts (t-8th) and Patriots (10th) were the only three AFC teams to crack the top third of the list.

Among the two New York teams, the Giants had the most media exposure, ranking 15 spots ahead of the Jets. And even despite drawing 38% lower local market ratings than their Bay Area rivals, the Oakland Raiders were the most popular national brand out of Northern California, ranking two spots ahead of the San Francisco 49ers (25th vs. 27th).
Posted 2:35:00 PM No comments:

A global e-mail virus spammed inboxes this afternoon, slowing -- and in some cases halting -- work at offices around the world as employees watched their inboxes inexplicably fill with e-mails under the subject line "Here you have." Some workers were forced to go without e-mail altogether, as the flood of spam put their services out of commission.

Organizations including NASA, Comcast, AIG, Disney, Proctor & Gamble, Florida Department of Transportation and Wells Fargo are just a few of the organizations apparently affected by the worm, which appears to have sent out hundreds of thousands, if not millions of e-mails.

When contacted by ABCNews.com, security firm McAfee said it was investigating the attack but confirmed that it had affected corporations around the world. Although McAfee did not disclose how widespread the attack was, around 4 p.m. Thursday afternoon, the subject of the spam e-mail, "Here you have," was the second hottest search on Google trends.

According to the Media Audit FYI:      Just five years ago, the Internet, or World Wide Web as we knew it represented 13.3% of a prospective new car buyer's total time spent exposed to all media in a typical day. Today, information from The Media Audit reveals that figure has grown to 36.8%, and it has now eclipsed the amount of time a new car buyer will spend listening to radio, watching TV, reading a newspaper, or driving by a billboard. A similar story can be told for all U.S. adults. In 2005, the Internet represented just 12.7% of a consumer's daily exposure to media, but today, it represents 34.3%. 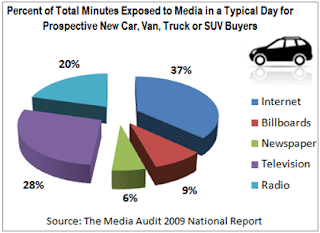 As a result of the Internet's staggering growth, advertisers have increasingly invested in multi-media marketing campaigns designed to reach consumers across different media platforms that include local and national websites. The benefit to both media and advertisers was that as media websites began to proliferate, many media websites began to attract a new group of younger and in some cases, more affluent consumers. And, despite reports that some traditional media audiences are aging or are in decline, the contrary exists for media websites.

What If The Media Just Ignored Koran Burner?

In Thursday's Orlando Sentinel, columnist Mike Thomas writes  "The Rev. Terry Jones was a sad-sack preacher, lucky to draw 50 people to his steel-shed house of prayer, when the words "burn" and "Quran" had an unfortunate collision in his limited brain.  That he has become an international phenomenon as a result must be a sign the apocalypse is near. 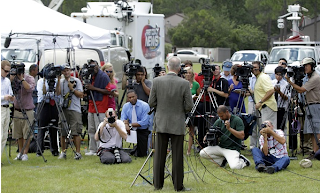 However, Thomas states as much as everyone is blaming him, this is far from his fault. He's just a prop.


"I ask you: If a sad little man burns some Qurans in the woods, and the media aren't there to film it, is it news?

We created the Rev. Terry Jones from dust. And in two weeks, to dust he shall return. Then we'll move on to the guys who plan to run over the Quran at their monster-truck pull. Whatever it takes to keep your attention.

It is all so truly tragical.

We could help head off such future nonsense if we folded up the circus tent and left Jones alone with his blowtorch and 30 followers." The statement tout's MPB's success over the last year, but offers no details on why Lewis resigned.

While serving as executive director, Lewis was involved in MPB's July 8 decision to pull the nationally syndicated show "Fresh Air," for what it deemed "inappropriate content," after comedian Louis C.K. answered questions from about wearing his shirt during sex. On July 27, the station announced it would return "Fresh Air" to its radio schedule in a new 9 p.m. time slot.

According to the Jackson Free Press, MPB fired reporter Carl Gibson in July after the station searched its mail servers, discovering that Gibson forwarded an internal e-mail to the Jackson Free Press using his work account. (Gibson freelances for the JFP and is friends with staff members.) The e-mail showed that MPB's decision to pull "Fresh Air" came less than 24 hours after its July 7 show aired with a reference to sex.

"How can you follow a legend like that?" Morgan told CNN after news that he will take over Larry King's prime-time hour starting January. "And then you think what a challenge, what an honor to be able to fill the shoes of someone like Larry King -- for me as a TV interviewer, which is primarily what I do back in England. I have watched him over the last 25 years interviewing the most interesting people in the world and to be ... without a doubt the most famous TV interviewer in TV history."

Morgan, best known to American viewers as a judge on NBC's "America's Got Talent," has most recently hosted "Piers Morgan's Life Stories" on television in the United Kingdom.
Morgan's show, which was not named in the CNN news release, will air live on CNN-US at 9 p.m. ET and will air worldwide on CNN-International in more than 200 countries, the network said.

Morgan will be based in New York, but also will work from Los Angeles and London, CNN said.

Morgan named Lindsay Lohan, Mel Gibson, Hillary Clinton, Sarah Palin as some people he'd like to interview. But whom would he want for his first interview?"

"Larry King would be it," Morgan said. "He knows everybody. I find him fascinating. He has an amazing recall for people and events. I love his enthusiasm."

King announced this summer that he was stepping aside from CNN's "Larry King Live," a show he began hosting in 1985.

What We Do When On-Line

Americans spend nearly a quarter of their time online on social networking sites and blogs, up from 15.8 percent just a year ago (43 percent increase) according to new research released today from The Nielsen Company. The research revealed that Americans spend a third their online time (36 percent) communicating and networking across social networks, blogs, personal email and instant messaging. 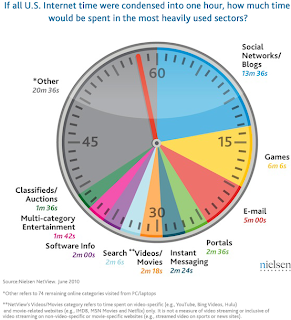 “Despite the almost unlimited nature of what you can do on the web, 40 percent of U.S. online time is spent on just three activities – social networking, playing games and emailing leaving a whole lot of other sectors fighting for a declining share of the online pie,” said Nielsen analyst Dave Martin. 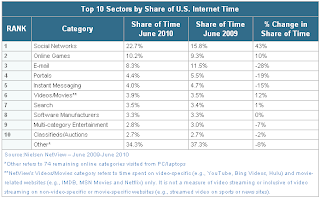 Despite some predictions otherwise, the rise of social networking hasn’t pushed email and instant messaging into obscurity just yet. Although both saw double-digit declines in share of time, email remains as the third heaviest activity online (8.3 percent share of time) while instant messaging is fifth, accounting for four percent of Americans online time. (Source: Nielsen NetView)

Although the major portals also experienced a double digit decline in share, they remained as the fourth heaviest activity, accounting for 4.4 percent of U.S. time online. (Source: Nielsen NetView)

The way U.S. consumers spend their Internet time on their mobile phones paints a slightly different picture to that of Internet use from computers. In a Nielsen survey of mobile web users, there is a double-digit (28 percent) rise in the prevalence of social networking behavior, but the dominance of email activity on mobile devices continue with an increase from 37.4 percent to 41.6 percent of U.S. mobile Internet time.
Posted 9:16:00 AM No comments: