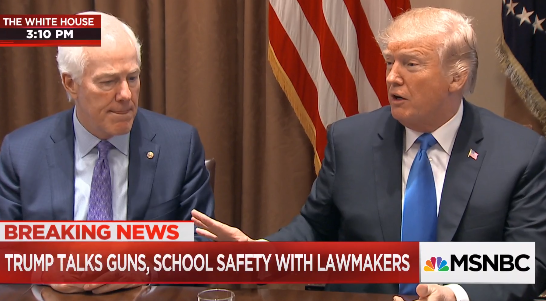 In a nationally televised negotiation with Republican and Democratic leaders at the White House Wednesday, President Trump appeared to back many liberal gun control proposals much to the delight of the liberal media. During their evening broadcasts ABC, CBS, and NBC touted how the President “stood up to the National Rifle Association” and pushed back against Republicans, reports conservative media watchdog Newsbusters.

The report on NBC Nightly News was arguably the most vicious against gun rights advocates. “Under pressure after Parkland, President Trump taking on his own party and the National Rifle Association today,” hyped White House correspondent Kristen Welker. “Mr. Trump, at a freewheeling hour-long meeting with a group of bipartisan lawmakers, trying to get something, anything done, appeared to embrace nearly everything he heard in the meeting[.]”


Welker noted that Trump wanted to “confiscat[e] guns from those deemed dangerous,” but slimed folks on the right by insinuating they didn’t care who had weapons, saying “a move opposed by many conservatives.” She then played a clip of Trump arguing that government should “take the guns first, go through due process second,” but she failed to mention such an act was unconstitutional, reports Newsbusters.
Posted 3:14:00 AM