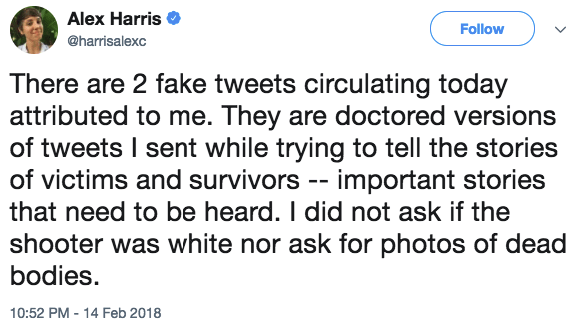 Two incidents hit The Miami Herald in recent days that underscore new tactics by those seeking to discredit mainstream media, and they augur what experts said are dark days in the battle between credible news and misinformation.

According to mcclatchydc.com, both incidents came in the wake of the shooting in Parkland, Florida, on Feb. 14 when a teenage gunman killed 17 students and adults at Marjory Stoneman Douglas High School.

In the first incident, a perpetrator used a software tool to create two fake tweets that looked like they came from the account of Alex Harris, a Herald reporter preparing tributes to the slain students. One fake tweet asked for photos of dead bodies at the school and another asked if the shooter was white.
he reporter almost immediately began getting angry messages.

“It was hampering our ability to cover this terrible tragedy in our own backyard because we’re having to deal with the backlash,” said Aminda Marques, executive editor of The Herald.

In a second incident, someone again used a software tool to create a phony Miami Herald story — in the high tension following the Parkland shooting — saying that a Miami-Dade middle school faced threats of “potentially catastrophic events” on upcoming dates, indicating that a new mass shooting was in the offing.

Screenshots of that fake story were passed along on Twitter and Snapchat, two social media platforms, said Monique O. Madan, a Herald reporter whose byline appeared on the fake story.

Worried parents and teachers grew alarmed, thinking it was a real Herald story. Dozens called or messaged Madan. “My phone just would not stop ringing,” she said.

The motive behind the hoaxes was not clear, but someone sought to create alarm.
Posted 3:19:00 AM