With the United States roughly six months away from its next presidential election, how similar or different are the most popular contemporary titles among the fans of the two major parties’ presumed nominees? In two words, the answer is “very different.”

In his final blog on the findings of Contemporary Music SuperStudy 2, Warren Kurtzman at Coleman Insights delves into findings we have yet to release regarding the relationship that exists between consumers’ political opinions and how they feel about contemporary music. In this time when common ground and bipartisanship can be hard to find, we observe similar differences when it comes to the contemporary music tastes of consumers. 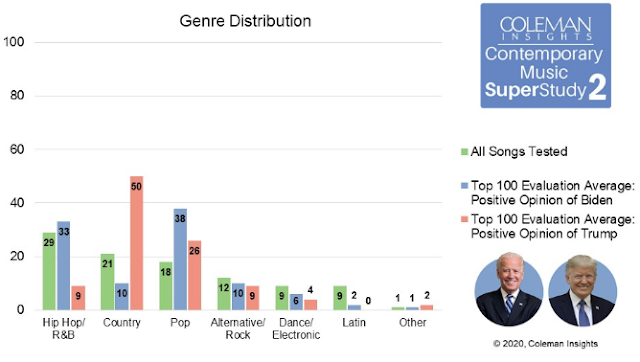 Among consumers who have a positive opinion of President Donald Trump, Country reigns supreme—an overwhelming 50% of their Top 100 titles are Country songs. At 26%, Pop is the only other genre achieving a double-digit share of the Top 100 contemporary songs with Trump fans.

The Top 100 songs among fans of former Vice President Joe Biden, however, look very different. They are led by Pop titles at 38%, followed closely by Hip Hop/R&B at 33%. Consumers with a positive opinion of Biden place a much smaller proportion of Country titles—10%—in their Top 100, which is interestingly almost the same amount as the 9% of Hip Hop/R&B titles than finish in the Top 100 with those who view Trump positively.
Posted 1:48:00 AM