In the 1980s, Fox and Chris O'Brien hosted the hugely successful WKRQ 101.9 FM morning show in a heated radio war for listeners with the WEBN-FM Dawn Patrol. 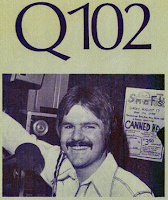 "Back when everybody went for the 'more music' sound, we continued to put personality on the air and tried to reflect Cincinnati. All of our people are very active, and that's one of the things which keeps us on top. No other radio station has had people on the air for 10 years who know the city and landmarks, and have greeted as many faces, shook as many hands, kissed as many babies, and been on as many telethons to make the personal impression we have."

Fox later hosted mornings from 1992 to 2000 on WUBE-FM with Eric Boulanger. His local broadcasting career essentially ended with his arrest soliciting sex from a teenager in Xenia. He admitted his mistake in a tearful interview on Barry's WKRC-AM show after the incident.

"For many years he been living back in his hometown in Slidell, Texas," Barry says. "He was there to help his brother with the farm, and also while his mother and father passed away. They had discovered oil on the farm so the family was doing pretty well."

"Jim spent the first and last years of his life on a farm in north Texas," Michaels says. "Jim was a success on the radio in Dallas, Indianapolis, and Savannah, but was especially loved in Cincinnati, getting big ratings first on WKRQ and then on WUBE.  Jim was a great talent coach and had an ear for hit music.   Jim had a warm, low key personable approach on and off the air.  It was no act.  A lot of us will miss Duane Pruitt, aka Jim Fox."
Posted 1:01:00 AM