The Rundown: Trump Taking Drug To Protect Against COVID-10 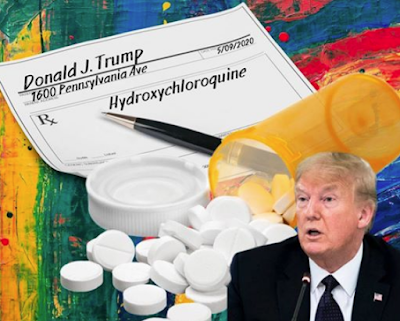 President Trump said Monday that he's taking the drug hydroxychloroquine to protect against the coronavirus, despite warnings from the Food and Drug Administration that it should only be used for the virus in a hospital or research setting because of potentially fatal side effects. He said he's been taking it for about a week and a half. Trump has repeatedly touted the malaria drug since the pandemic began, but in addition to the warnings about side effects, four recent studies have shown it doesn't work to prevent or treat against the coronavirus. 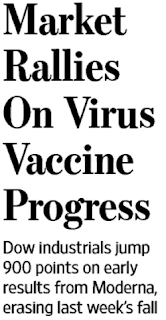 Trump said his doctor didn't recommend the drug to him, but he requested it from the White House physician, Dr. Sean Conley, telling reporters, "I started taking it, because I think it’s good. I’ve heard a lot of good stories." Conley said in a statement that after having numerous discussions with Trump about the drug, quote, "we concluded the potential benefit from treatment outweighed the relative risks." At least two White House staffers tested positive for the virus earlier this month.

U.S. drugmaker Moderna announced yesterday that its experimental vaccine against the coronavirus showed encouraging results in very early testing, producing immune responses in eight volunteers, who developed antibodies similar to those seen in people who'd recovered from the virus. Moderna also said the vaccine seems safe, but much more extensive testing is needed. In the next phase, researchers will try to determine which dose is best.

More than 130,000 U.S. autoworkers returned to work across the country yesterday for the first time after their factories were closed down nearly two months ago because of the coronavirus. General Motors, Ford, Fiat Chrysler, Honda and Toyota reopened dozens of factories, with screening and other safety procedures implemented to protect workers.

In other developments:
The World Health Organization gave in to calls Monday from most of its member states to launch an independent probe into how it managed the global response to the coronavirus.

➤SAUDI WHO KILLED THREE AT FLORIDA MILITARY BASE COORDINATED WITH AL-QAIDA: The Saudi Air Force officer who killed three U.S. sailors at a military base in Pensacola, Florida, last December communicated with al-Qaida operatives about planning and tactics in the months before the attack, U.S. officials said Monday.

The contacts were discovered after FBI technicians were able to break into two of 21-year-old Second Lieutenant Mohammed Alshamrani's iPhones, which he'd locked and tried to destroy before being killed by a sheriff's deputy during his rampage at a classroom building. Alshamrani was undergoing flight training at Pensacola, something members of foreign militaries routinely do, but the new information, including that he was radicalized before arriving in the U.S., raises questions about the vetting of them. Attorney General William Barr criticized Apple for not helping open the phones and called on them to do more to cooperate with law enforcement, saying, "In cases like this, where the user is a terrorist, or in other cases, where the user is a violent criminal, a human trafficker, a child predator, Apple’s decision has dangerous consequences for public safety and the national security and is, in my judgment, unacceptable."

But Apple denied that it hadn't provided help, saying it had given the FBI, quote, "every piece of information available to us." It said it doesn't have the ability to unlock passcode-protected devices, and rejected the idea of weakening encryption.

➤J.C. PENNEY TO CLOSE MORE THAN 240 STORES: J.C. Penney said Monday that as part of its restructuring after filing for Chapter 11 bankruptcy protection on Friday it will permanently close more than 240 stores, nearly 30 percent of its 846 locations. The department store chain said it plans to close about 192 stores by next February, and then another 50 stores in the year after that, leaving just over 600 stores. J.C. Penney is the largest retailer to file for bankruptcy since the pandemic forced sweeping store closures. It filed days after J.Crew and Neiman Marcus also sought bankruptcy protection.

➤STUDY: HURRICANES, TYPHOONS, CYCLONES GETTING STRONGER: A new study out Monday from researchers at the University of Wisconsin and the National Oceanic and Atmospheric Administration found that hurricanes, typhoons, and tropical cyclones around the world are becoming stronger and potentially more deadly as the Earth gets warmer due to climate change. The study looked at nearly 40 years of data and found that the probability of storms reaching major hurricane status increased each decade, with study author Jim Kossin telling CNN the increase was about eight percent per decade. The study finds that global warming has increased sea surface temperature in areas where tropical cyclones form. The combination of those warmer temperatures and changes in atmospheric conditions have allowed storms to more easily reach higher strengths.
Posted 4:37:00 AM