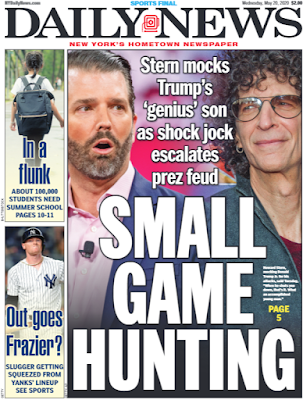 Radio icon Howard Stern and Donald Trump Jr.continued to sling mud at each other Tuesday amid their ongoing feud over the shock jock's attitude toward President Trump and his supporters.

After Trump Jr. knocked "Hollywood Howard" last week for his harsh words for his father's supporters, Stern mocked the "genius" that is the president's eldest son.

“He is such a wit. He is such a genius. He would have made a fortune if he wasn’t under his father’s thumb," Stern quipped on Tuesday. “I’d list all of junior’s accomplishments right now, but I only have a three-hour show. It would take the whole show. He’s too strong for me physically and mentally for me to comment on."

Fox News reports the war of words began last week when Stern blasted those who back the president on his Sirius XM show.

“The oddity in all of this is the people Trump despises most, love him the most,” Stern had said. “The people who are voting for Trump, for the most part ... he wouldn’t even let them in a f---ing hotel. He’d be disgusted by them. Go to Mar-a-Lago, see if there’s any people who look like you. I’m talking to you in the audience.”

Stern recently criticized President Trump over missteps in his administration's response to COVID-19 and suggested his supporters ingest disinfectants. The two have a long history, with Trump often appearing on Stern's show prior to his White House run.
Posted 1:50:00 AM