Media industry observers have hailed live sports as the “glue” holding the traditional pay-TV ecosystem together amid the proliferation of on-demand streaming content in recent years. Now, with most major sports properties sidelined due to the coronavirus pandemic, that theory is being put to the test, according to the Morning Consult.

The early results, in the form of subscriber losses reported in pay-TV providers’ first-quarter results, have been a source of significant concern about the future of cable and satellite television as we know it today.

Subscriptions fell by a record 7.6 percent from the same period in 2019, according to reported results and estimates from industry analysts at the boutique research firm MoffettNathanson, marking the seventh straight quarter in which subscriber loss accelerated.

More concerning for the pay-TV industry is that first-quarter results, which reflect business from January through the end of March, only include the earliest days of the coronavirus pandemic in the United States and corresponding sports shutdown. Industry analysts expect even more pronounced declines in the current period as the sports shutdown and economic fallout of the pandemic wear on.

The results of a recent Morning Consult poll indicate that is playing out, as 8.3 percent of traditional pay-TV subscribers said that they dropped their service in the past three months, a period that includes portions of both the first and second quarters. 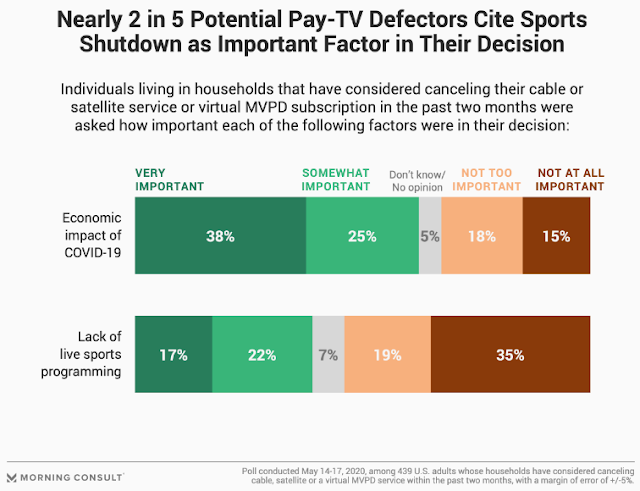 In addition to cable and satellite losses in the quarter, net subscriptions to live TV streaming services, known as virtual MVPDs, dipped for the first time since those services became available in 2015, shedding around 341,000 subscribers, per the MoffettNathanson note.

“Live sports were arguably the last, best reason for choosing a vMVPD over a sampling of” subscription video on demand services, the MoffettNathanson note said. “And then sports stopped.”

As the sports shutdown drags on, the pay-TV industry becomes more vulnerable to further acceleration of subscriber losses.