The Rundown: Recovery To Be Slow

Federal Reserve Chair Jerome Powell said in a 60 Minutes interview Sunday that the U.S. economy may begin to recover from its coronavirus-induced recession in the second half of the year if there isn't another wave of the virus. But his optimism was tempered when it came to how long it would take, saying a recovery could last through the end of next year, and that a vaccine would likely be necessary for Americans to feel safe to return to their normal economic activity. He noted that the economy was healthy before the pandemic forced widespread business shutdowns and historically high unemployment, and said it should therefore rebound, quote, "substantially" once the virus is contained. Powell also repeated that he believes Congress and the Fed must be ready to provide more financial support to prevent permanent damage to the economy from large number of small business bankruptcies or long-term unemployment. 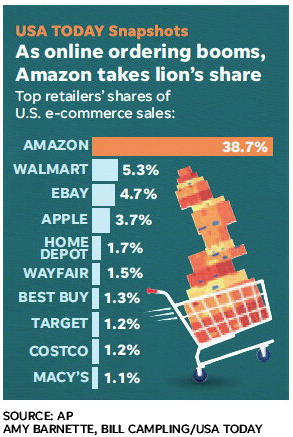 Meanwhile, as U.S. fatalities from the coronavirus passed 89,500 as of last night, according to Johns Hopkins University's count, many states continued to reopen, while worries continued about possible spikes in cases as they do. Texas, which was one of the earliest states to allow stores and restaurants to reopen, had its highest single-day increase in cases on Saturday, 1,801 of them. However, Texas officials said more testing was a big reason why, meaning testing was finding more cases, not necessarily that there were more of them. In California, Butte County said that a person who attended a Mother's Day church event with more than 180 other people tested positive the day after the service. Officials are trying to get everyone who was there tested and have notified all of them to self-quarantine. The religious event took place despite it not being allowed under Governor Gavin Newsom's stay-at-home order.

Another eight sailors on the USS Theodore Roosevelt aircraft carrier have again tested positive for the coronavirus after having gone through at least two weeks of isolation and testing negative twice in a row before being allowed to return to the ship, bringing the total number to 13 sailors. The cases are raising questions about if a second infection or a relapse is possible, as well as about the accuracy of the testing. Infections with the virus could possibly be at such a low level that it's not detected by the test.

➤REPORT: STATE DEPT. I-G FIRED BY TRUMP WAS PROBING IF POMPEO HAD STAFFER DO PERSONAL ERRANDS: The State Department inspector general fired by President Trump on Friday night, Steve Linick, was investigating if Secretary of State Mike Pompeo made a staffer do personal errands for him and his wife, including walking his dog, picking up his dry cleaning, and making dinner reservations for the couple, CNN said Sunday, citing a Democratic aide. It was previously reported that Pompeo had recommended that Linick be removed. The firing was the latest of a string of recent dismissals by Trump of independent government watchdogs who do administration oversight. The move drew bipartisan criticism from Congress, including from Republican Senator Chuck Grassley, who's long championed inspectors general. But Republican Senator Ron Johnson told CNN yesterday that White House officials had explained the reason for Linick's firing to him and he understood it, but he wouldn't elaborate. House Speaker Nancy Pelosi said on CBS' Face the Nation that she hadn't been given any additional reasoning, calling the firing "very unsavory."

➤CRIMINAL PROBE OPENED INTO L.A. EXPLOSION THAT INJURED 12 FIREFIGHTERS: Police and fire investigators opened a criminal probe Sunday into the cause of an explosion the night before at a hash oil manufacturer in downtown Los Angeles that injured 12 firefighters. Eight of them remained hospitalized yesterday, two of them in critical but stable condition. They are all expected to survive. Fire Captain Erik Scott told local radio KNX that firefighters had though they were battling a routine fire in the one-story building, but as they got further inside they head a loud hissing sound and rumbling before the explosion. The firefighters had to run through a wall of flames to get out and those on the roof had to go down a ladder that was engulfed in flames.

➤13 SHOT AT LOUISIANA MEMORIAL SERVICE: Thirteen people were shot at an impromptu memorial service Saturday night (May 16th) in a vacant lot in Bogalusa, Louisiana. No one was killed, but one victim was in critical condition. Police said they believe the shots were fired from a car that drove by. No arrests have been made. A large group of people had gathered to remember a man named Dominique James, who was missing for several days before being found dead inside his vehicle in a wooded area on May 8th in what police consider a homicide. The gathering was held after James' family was told they couldn't have a regular memorial service because of coronavirus stay-at-home orders.

➤HARVICK WINS AS NASCAR RETURNS WITH DARLINGTON RACE: NASCAR returned from its 10-week coronavirus shutdown on Sunday (May 17th) at Darlington Raceway in South Carolina, and Kevin Harvick got the win in the 400-mile race, which took place before empty grandstands, with no fans allowed. Harvick said, "I didn’t think it was going to be that different, then we won and it’s dead silent out here. We miss the fans." The race was called "The Real Heroes 400" and dedicated to health care workers who are fighting the pandemic. There were smaller teams for each car and everyone had to have their temperature checked and wear masks.

➤MCILROY-JOHNSON WIN SKINS GAME IN LIVE GOLF'S RETURN TO TV: Teammates Rory McIlroy and Dustin Johnson were the winners Sunday (May 17th) as live golf returned to TV from its coronavirus suspension with a Skins game, in which players compete for a prize on every hole. McIlroy clinched the victory after it came down to a closest-to-the-hole tiebreak. More than $5 million was raised for coronavirus relief in the two-on-two exhibition at Seminole Golf Club in Juno Beach, Florida, that the duo played against Rickie Fowler and Matthew Wolff. There were no fans and no caddies, and the competitors followed social distancing. 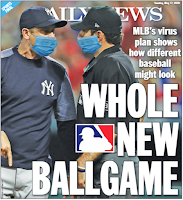 ➤MLB SENDS TEAMS PROPOSED RULES FOR THIS SEASON: Major League Baseball on Friday (May 15th) sent teams a first draft of an Operations Manual with proposed rules for this coronavirus-delayed season once it finally begins. According to media reports, they include: no high-fives, fist bumps, spitting, bat boys/girls, mascots or lineup card exchanges; players can't touch their face to give signs or lick their fingers; seats in the empty stands near the dugout should be used to maintain social distance; first- and third-base coaches can't approach baserunners or umpires; players shouldn't socialize with opponents; and managers and coaches must wear masks in the dugouts. Teams were asked to respond with their suggested input.

➤NFL'S BAKER, DUNBAR RELEASED FROM JAIL ON BOND: NFL cornerbacks DeAndre Baker of the New York Giants and Quinton Dunbar of the Seattle Seahawks were released from jail on Sunday (May 17th), the day after surrendering on armed robbery charges. Baker and Dunbar were at a cookout Wednesday night at a home in Miramar, Florida, when a fight broke out. It's alleged that Baker then pulled out a gun and he, Dunbar and two other men began robbing other people there of money, watches and other valuables. Their attorneys say they have.
Posted 4:42:00 AM