As the coronavirus continues to significantly impact the U.S. economy, BIA Advisory Services has adjusted its revenue projections for 2020 local advertising. The company now estimates the total local advertising market for all of 2020 will be $144.3 billion, which is a 10.6 percent decrease from BIA’s prior estimate of $161.3B in November 2019. The new estimate also represents a 3.6 percent decline from 2019, even with the added political advertising revenue of $7.1B anticipated this year.

The media industry has been especially hard hit in the current crisis.  As of April 21, 2020, the media/entertainment sector had the second highest percentage of issuers affected by ratings actions by S&P (including downgrades, negative outlook revisions, and negative CreditWatch placements) due to COVID-19, oil prices, or both, second only to the automotive industry[1].

“To formulate the update to our local advertising estimates, we considered all the different angles of the economic impact of COVID-19 on the economy, including unemployment, local market specific factors, and the declining ad spend of key business verticals,” said Mark Fratrik, SVP and Chief Economist, BIA Advisory Services. “A realistic view of the virus is that it will continue to have a negative impact on the second quarter, with some continuation into the 3rd quarter. We have assumed that there will be a strong rebound in the latter part of the year, but we will have to re-evaluate as the on-going economic impact becomes clearer.”

BIA’s forecast tracks spending across all media platforms. BIA’s pre-COVID and post-COVID estimates for different media channels indicates that advertisers are pulling back on spending (see chart below). Media is being impacted by different verticals, including: 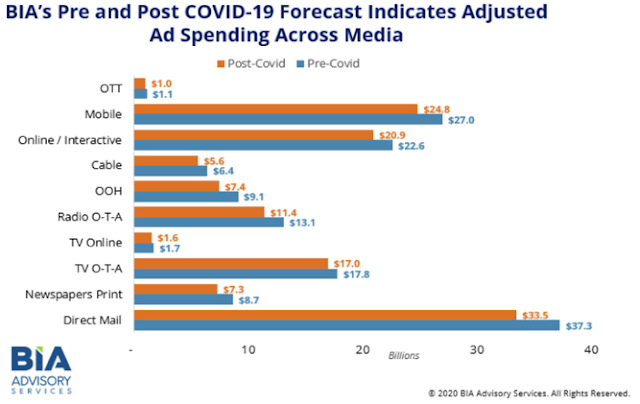 “As this situation unfolds, we are continually running our forecast models to make sure our estimates reflect economic conditions,” said Thomas Buono, CEO and Founder, BIA Advisory Services. “This unprecedented moment is greatly affecting our clients’ revenue opportunities, and we believe businesses can use solid data and insights to take steps to minimize their losses and take steps to plan for the recovery.”

Buono says that he has been advising client companies in the media industry to take several steps now to keep their companies going and then preparing for the economic rebound in three key areas: preserving liquidity; emphasize and manage relationships; and, think forward as a team.
Posted 10:23:00 AM