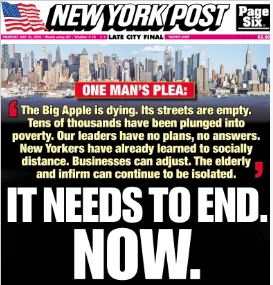 The World Health Organization on Wednesday reported the largest one-day increase in global coronavirus cases since the pandemic began, 106,000 in the previous 24 hours. Almost two-thirds of those cases were in just four countries, with a WHO epidemiologist confirming to CNN that they are the U.S., Russia, Brazil and India. WHO director-general Tedros Adhanom Ghebreyesus said at a news conference, "We still have a long way to go in this pandemic," and expressed concern about the growing number of cases in poor countries. In the U.S., there were more than 93,400 deaths as of last night, according to Johns Hopkins University's count, and more than 1,551,000 confirmed cases.

Two studies published yesterday had positive results suggesting that recovering from infection with the coronavirus may lead to immunity from reinfection. In one study, nine monkeys who were infected with the virus and then recovered didn't get sick after being exposed to the virus again. Dr. Dan Barouch of the Center for Virology and Vaccine Research at Harvard's Beth Israel Deaconness Medical Center, whose studies were published, said, "It's very good news."

In the other study, 25 monkeys were given six prototype vaccines, and then were exposed, along with 10 control monkeys, to the coronavirus. Barouch said there was a, quote, "substantial degree of protection" in the vaccinated monkeys, and eight of them were completely protected. All of the control animals had a high degree of virus in their noses and lungs.

In other developments:
➤THREE PEOPLE INJURED IN SHOOTING AT ARIZONA MALL: Three people were injured, one of them critically, in a shooting yesterday evening at an outdoor mall in Glendale, Arizona, according to ABC News. All of the victims are expected to survive. When police arrived at the Westgate Entertainment Center, the scene was no longer active, according to a police spokesperson, who said officers located the suspect and took him into custody. State Senator Martin Quezada, who was at the mall at the time of the attack, tweeted: "I just witnessed an armed terrorist with an AR-15 shoot up Westgate." Officials said they were aware of reports of disturbing social media videos from the suspect, whose name they didn't release, and asked the public to submit them.

➤MICHIGAN RIVER SWOLLEN BY BREACHED DAMS CRESTS LOWER THAN EXPECTED: A central Michigan river swollen after the breach of two dams Tuesday evening crested Wednesday afternoon some three feet lower than had been projected, at just over 35 feet, and floodwaters appeared to be receding in some areas hours later. At least 10,000 people evacuated their homes in the city of Midland and along the Tittabawassee River after the dams failed following days of heavy rain. No deaths or injuries were reported. Governor Gretchen Whitmer said the state will be investigating the operators of the Edenville and Sanford dams, saying, "This incredible damage requires that we hold people responsible and we are going to pursue every line of legal recourse that we have." Federal regulators had warned for more than 20 years about inadequate spillways at the Edenville dam.

➤HAMLIN WINS NASCAR'S SECOND RACE BACK: Denny Hamlin won NASCAR's second race back from its 10-week coronavirus shutdown last night (May 20th), its first Wednesday race since 1984. Hamlin's victory at Darlington Raceway in South Carolina came in a race that was stopped with 20 laps remaining because of rain. There were no fans in the stands, and everyone had to have their temperature checked and wear a mask.

➤BODY OF EX-WWE STAR GASPARD FOUND AFTER SUSPECTED DROWNING: The body of 39-year-old former World Wrestling Entertainment star Shad Gaspard was found early Wednesday (May 20th) washed up on Venice Beach in Los Angeles, three days after he went missing while swimming with his 10-year-old son and getting caught in a rip current. A witness told TMZ Gaspard told rescuers to help his son first before a wave crashed down on him and he disappeared. His son was rescued. Gaspard was part of the tag-team group Cryme Tyme before retiring from the WWE in 2010. 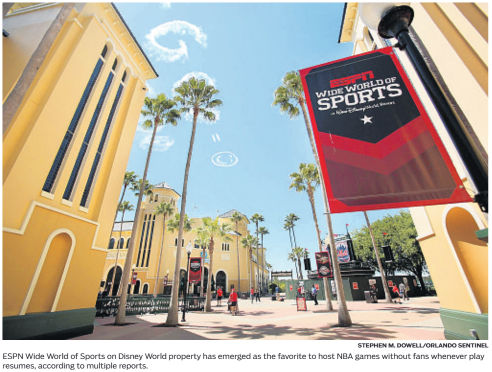 ➤NCAA TO ALLOW VOLUNTARY FOOTBALL, BASKETBALL WORKOUTS: The NCAA Division I Council voted yesterday (May 20th) to allow voluntary workouts by football and basketball players as of June 1st. NCAA officials said health and safety protocols mandated by their schools or local health officials because of the pandemic will have to be followed. Meanwhile, Ohio State athletic director Gene Smith said he believes the school's football team could safely play home games with 20,000 to 30,000 fans in its 105,000-seat stadium.

➤NFL PLAYER SUES UNITED, SAYS WAS SEXUALLY HARASSED, ASSAULTED ON FLIGHT: An unnamed NFL player has filed suit against United Airlines, alleging that he was sexually harassed and assaulted by a female passenger on a February flight from L.A. to Newark, New Jersey, and that the airline failed to properly respond to complaints.The suit claims the player and another passenger in the same row told flight attendants four times that the woman was making unwanted sexual advances before she was moved to another seat. The woman, who appeared to be drunk, allegedly massaged the NFL player's knees and thighs, later grabbed and groped him, and then pulled off his face mask and grabbed his genitals.

➤CONSUMERS WANT TO WATCH MOVIES AT HOME: As COVID-19 restrictions across the country are beginning to relax, but movie-goers are not ready to return to the theater, according to a study from analytics firm Performance Research, in partnership with Full Circle Research Co. According the study, 70% say they are more likely to watch from their couch, while just 13% say they are more likely to watch at a local cinema (with 17% not sure). “Just as the country begins to open up there has been a swing toward increasing caution, with a majority of Americans clearly saying ‘not yet’ when it comes to attending large public events,” says Jed Pearson, president of Performance Research.
Posted 4:40:00 AM