The Rundown: All States Partially Re-Opened

Every state has begun to partially reopen from their coronavirus shutdowns as of today, with the last state to do so, Connecticut, set to allow outdoor dining spaces, offices, retail stores, malls, museums and zoos to reopen today with restrictions. The nationwide reopening, however, is coming as at least 17 states still had an growing trend of average new daily coronavirus cases. More than 91,800 people have been killed in the U.S. as of last night, according to Johns Hopkins University's count, and there have been more than 1,527,000 confirmed cases. 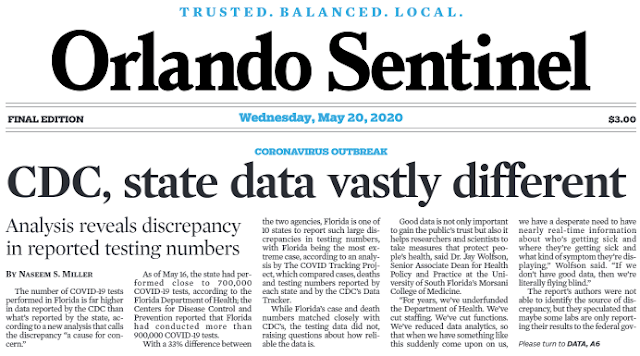 Health officials in some states have also been accused of misrepresenting their statistics, accidentally or not, to make the situation look better. Rebekah Jones, the scientist who created Florida's coronavirus cases dashboard, said this week that she was fired for refusing to manipulate data, quote, "to drum up support for the plan to reopen."

In Georgia, a graph published by the Department of Public Health on May 11th showed new cases declining, but the entries weren't chronological, but in descending order, so dates went back and forth in time. It was taken down after a day and Governor Brian Kemp's office denied an attempt to deceive the public. And Virginia and Vermont have been combining the results of virus tests and antibody tests, which doesn't give a real picture of the virus' spread. They say they've now stopped doing so.

In other developments:
➤REPUBLICAN LEADERS SAY NOT IN RUSH TO PASS MORE CORONAVIRUS AID: Congressional Republican leaders said Tuesday that they're not in a rush to pass another coronavirus aid package, with Senate Majority Leader Mitch McConnell telling reporters, "We need to assess what we've already done, take a look at what worked and what didn't work, and we'll discuss the way forward in the next couple of weeks." Their stance comes after the Democratic-led House of Represented passed a new $3 trillion aid package for coronavirus relief, the cost about equaling the cost of the four previous packages passed by Congress.

➤10,000 EVACUATED IN MICHIGAN AS TWO DAMS BREACHED BY FLOODING: Some 10,000 people in Michigan were forced to evacuate from their homes Tuesday after two dams were breached due to flooding after several days of heavy rain in the Midwest. A flash flood watch was issued for locations along the Tittabawassee River after the breach at the Edenville Dam and the Sanford Dam. Governor Gretchen Whitmer said the threat was particularly serious for the city of Midland, saying its downtown could potentially, quote, "be under approximately nine feet of water."

➤GLOBAL CARBON DIOXIDE EMISSIONS DOWN 17 PERCENT AT PEAK OF CORONAVIRUS SHUTDOWNS: A new study found that global carbon dioxide emissions were down by 17 percent at the peak of the pandemic shutdowns last month, but the levels are already starting to go back up. The international team of scientists said that the brief dip will likely be just, quote, "a drop in the ocean" when it comes to climate change. They calculated that carbon emissions for the year will end up being between four and seven percent lower than last year's levels, depending on how long and how strict the lockdowns will remain, but that's still the biggest annual decline since World War Two. Nearly half the emission reductions came from less transportation pollution, mostly involving cars and trucks. The U.S. cuts its carbon emissions by about one-third during one week in April.

➤JOHNSON & JOHNSON TO STOP SELLING TALC-BASED BABY POWDER: Johnson & Johnson said Tuesday that it will stop selling its talc-based Johnson's Baby Powder in the U.S. and Canada. Demand for the iconic product has fallen in the two countries as thousands of lawsuits have been brought claiming it causes ovarian cancer or the lung cancer mesothelioma. The company insists the baby powder is safe and will keep selling it outside the U.S. and Canada. Johnson & Johnson will still sell its cornstarch-based baby powder in North America.

➤JOHN GLENN'S WIDOW, ANNIE GLENN, DEAD AT 100 OF THE CORONAVIRUS: Annie Glenn, the widow of late astronaut and U.S. Senator John Glenn, died Tuesday of complications of the coronavirus at a Minnesota nursing home. She was 100. Annie Glenn advocated during her life for people with speech disorders after suffering with a severe stutter. She also served on the boards of child abuse and speech and hearing organizations, and was an adjunct professor of speech pathology at Ohio State. Her husband, who was the first American to orbit the Earth, died in 2016 after they'd been married for 73 years.

➤SOME NFL TEAMS REOPEN TRAINING FACILITIES: Some NFL teams reopened their training facilities on Tuesday, but the number that could was limited because of ongoing state and local restrictions due to the pandemic. In the first phase of the NFL's plan, coaching staff and all players except those undergoing injury rehab aren't yet allowed at the facilities. The teams who did open them yesterday included the Dallas Cowboys, Atlanta Falcons, Houston Texans, Arizona Cardinals, Kansas City Chiefs and Indianapolis Colts. 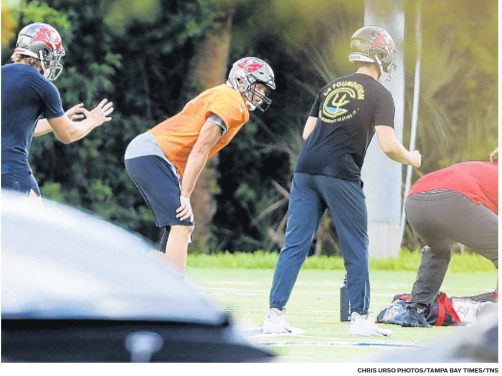 ➤BRADY HOLDS WORKOUT WITH NEW BUCS TEAMMATES AT HIGH SCHOOL FIELD: Tom Brady held a workout with some of his new Tampa Bay Buccaneers teammates at a high school field in Tampa early Tuesday. The Tampa Bay Times reported that the informal, players-only workout organized by Brady at Berkeley Preparatory School lasted for two hours. An NFL spokesperson told ESPN Brady can conduct the workouts as long as they are following the coronavirus safety recommendations and guidelines of state and local authorities and medical experts.

➤NASCAR HOLDING SECOND RACE BACK TONIGHT: NASCAR will hold its second Cup Series race back from its coronavirus shutdown tonight, the first on a Wednesday night in 36 years. The Toyota 500 will be held at Darlington Raceway in South Carolina, with no fans in the stands. NASCAR is scheduling races on some weekdays it usually doesn't as it tries to make up the eight races it missed during 10 weeks of the shutdown.
Posted 4:37:00 AM