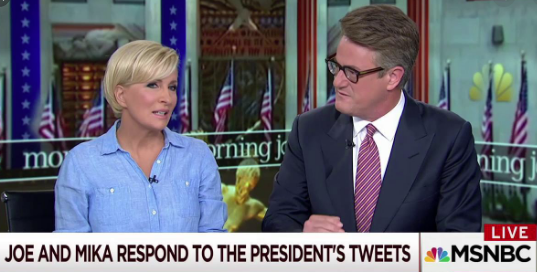 In a scorching end of show monologue Wednesday, Brzezinski blasted the president — accusing him of “trying to deflect” attention from his coronavirus response by making references to the case of Lori Klausutis, who interned in Scarborough’s office when he was in Congress and was found dead at her desk in July 2001.

“He’s tweeting again all sorts of crazy things,” Brzezinski said. “Once again tweeting conspiracy theories about Joe, falsely accusing him of murder, talking about a death of a young staffer in his congressional office years ago, and calling him dangerous to walk the streets.”

From there, Brzezinski went off.


“That’s sick,” she said. “Donald, you’re a sick person! You’re a sick person! To put this family through this, to put her husband through this, to do this just ’cause you’re mad at Joe, because Joe got you again today. Because he speaks the truth, and he speaks plainly about your lack of interest, and empathy in others, and your lack of ability to handle this massive human catastrophe, the fact that you have made it worse and you make it worse every day.”

Brzezinski also called on Twitter to remove the president’s tweets.

A call is being set up with @jack and the GC. Thanks for your interest. I will keep you posted https://t.co/eyQwke6KB4
— Mika Brzezinski (@morningmika) May 20, 2020