Shareholders of Tribune Publishing elected two representatives of hedge fund Alden Global Capital to the newspaper chain’s board Thursday, as the man with the third-largest stake in the company seeks to break it up.

Mason Slaine, who owns a 7.9% stake in the company, told the Chicago Tribune he voted against all six board nominees at Tribune Publishing’s annual shareholder meeting, and said he now believes the company should sell all of its newspapers to local investors.

“I’m not happy with the way the company is being run,” said Slaine, who lives in Florida. “I voted no on everything.”

An investor and the former CEO of business information publisher Thomson Financial, Slaine owns 2,866,349 shares of the Chicago-based newspaper company, most of which he acquired on the open market since February. Slaine said he approached Tribune Publishing executives last year to inquire about buying the company’s Florida newspapers. He believes there will be interest from local buyers in the chain’s other markets as well.

Tribune Publishing is “aware” of his interest in buying the Florida papers, but did not respond to his inquiry, Slaine said. 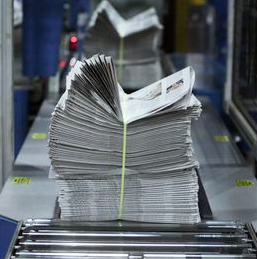 “The company does not comment on activity related to mergers and acquisitions,” Tribune Publishing spokesman Max Reinsdorf said.

Slaine is not alone in seeking to carve out pieces of the company. On Thursday, the Baltimore Sun reported that a group of Baltimore philanthropists, business people and the union representing journalists are continuing a campaign to return that newspaper to local ownership, which it hasn’t had since 1986, but its chances of success were uncertain. Journalists at the Chicago Tribune earlier this year launched their own efforts to find new owners.

Earlier this month, the union representing newsroom employees at the Chicago Tribune and other Tribune Publishing newspapers launched a proxy campaign to unseat the two Alden board members. Without an alternate slate of nominees, however, Slaine’s opposition and the union campaign were largely symbolic.

Alden, which has a track record of sweeping layoffs at its newspaper properties, took a 32% stake in Tribune Publishing in November, mostly through buying former nonexecutive chairman Michael Ferro’s holdings. In total, Alden purchased 11.5 million shares of Tribune Publishing for $145.4 million.

The two Alden representatives, Dana Goldsmith Needleman and Christopher Minnetian, were added to the newspaper company’s board in December, expanding it to eight members, but Alden was restricted from increasing its stake in the company to more than 33% until June 30.

Like much of the media industry, Tribune Publishing has struggled during the COVID-19 pandemic, implementing furloughs and salary reductions across its newspapers to offset advertising revenue declines. Earlier this month, the company suspended its 25-cent cash dividend, which paid shareholders about $9 million a quarter, to “preserve liquidity.”
Posted 3:18:00 AM