Goldman Sachs expects global music revenues to tumble by up to 25% in 2020, largely due to widespread disruption across all sectors of the industry due to the coronavirus crisis, CNBC reports.

Analysts at the U.S. investment bank said in a research note that live music would be “severely impacted” by the postponement and cancellation of events this year, leading to a 75% drop in revenue.

But, over the longer-term, analysts at the bank expected a strong rebound, citing the secular growth of paid streaming, growing demand for music content and live events, new licensing opportunities and positive regulatory developments.

As a result, global music revenues were projected to reach $142 billion by the end of the decade, reflecting an 84% increase when compared to the 2019 level of $77 billion. 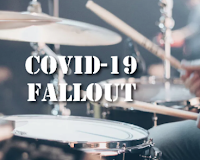 The pandemic has meant countries have effectively had to shut down, with many world leaders imposing stringent restrictions on the daily lives of billions of people.

With worldwide mobility brought close to a standstill, analysts at Goldman Sachs said time spent listening to music “may shift away from music streaming to other forms of entertainment in the short term.”

But, “we believe the industry’s long-term growth outlook is intact,” they added.

The bank estimated the online streaming market could grow to capture 1.2 billion users by 2030. To be sure, that’s almost four times higher than the 2019 level of 341 million paid subscribers.

Analysts at Goldman singled out record companies Universal Music Group and Sony Music as the “main beneficiaries” of the growth of streaming and improved monetization of music content.

“The streaming platforms also stand to beneﬁt from the rising adoption of music streaming and their vast amount of consumer data, although competition will likely intensify: we prefer leading, scaled players such as Spotify and Tencent Music,” they said.
Posted 1:49:00 AM