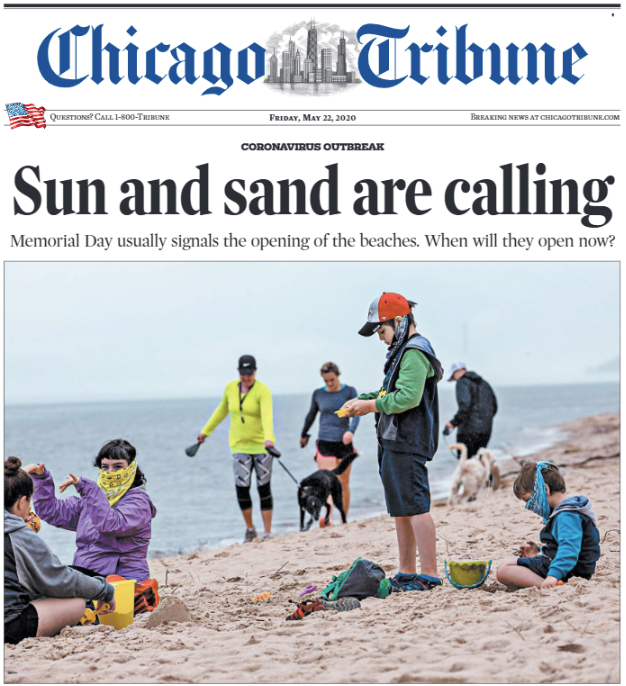 The Labor Department reported Thursday that more than 2.4 million people filed initial claims for unemployment last week, bringing the total number since the coronavirus pandemic began to cause lockdowns across the country in mid-March to 38.6 million. The number of people filing first-time claims has slowed for seven straight weeks, but they are still extremely high, even as states have begun to reopen economically over the past three weeks.

The U.S. Centers for Disease Control and Prevention has posted new guidance on its website that estimates 35 percent of coronavirus infections are asymptomatic. It said its best estimate is that 0.4 percent of people who have the virus and show symptoms will die, with it at 1.3 percent for those age 65 and older, and that 3.4 percent of symptomatic people will need to be hospitalized, rising to 7.4 percent for those 65 and older. The CDC also estimated that 40 percent of coronavirus transmission is taking place before people feel sick.

President Trump toured a Ford Motor plant in Michigan yesterday that had been repurposed to make ventilators. Trump didn't publicly wear a face mask, but told reporters he'd worn one while out of public view on the tour by Ford executives, and took one out of his pocket to show them. However, he said he didn't wear it publicly because, quote, "I did not want to give the press the pleasure of seeing it." Ford policy requires mask-wearing, as does Michigan's state directive. Federal health authorities have said all Americans should wear them, however Trump has refused to wear one publicly, reportedly telling aides he believes it makes him look weak.

In other developments:
➤SAILOR WOUNDED IN SHOOTING AT TEXAS NAVAL BASE THAT FBI SAYS IS 'TERRORISM-RELATED': A sailor was wounded in a shooting at a Texas naval base early Thursday that the FBI said was being investigated as being "terrorism-related." The gunman, who AP cited officials identifying as Adam Alsahli, was killed by base security. Alsahli tried to speed through a security gate at Naval Air Station Corpus Christi at around 6:15 a.m., opening fire and wounding a sailor who was part of base security. She was still able to roll over and hit a switch that raised a barrier, preventing the gunman from getting on the base. The sailor was treated for minor injuries. FBI Supervisory Senior Resident Agent Leah Greeves said investigators were working to determine whether a second person of interest was at large. She wouldn't say why they believe the attack was related to terrorism. Alsahli was a Corpus Christi resident. 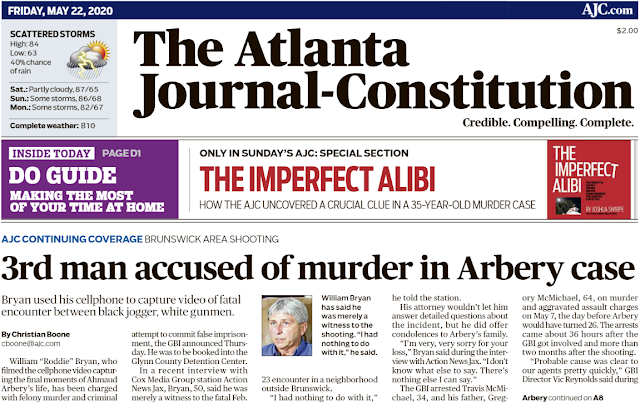 ➤MAN WHO RECORDED PHONE VIDEO OF ARBERY'S FATAL SHOOTING CHARGED WITH MURDER: The man who took cellphone video of Ahmaud Arbery's fatal shooting in Georgia in February was charged with murder Thursday (May 21st), as well as attempt to commit false imprisonment. The video taken by 50-year-old William "Roddie" Bryan Jr. that leaked online earlier this month sparked outrage and led to the arrest for murder of father and son Gregory McMichael, who's 64, and 34-year-old Travis McMichael more than two months after the killing. The 25-year-old Arbery, who was black, was fatally shot outside the city of Brunswick after the McMichaels, who are white, grabbed guns and chased him in a truck when they saw him running through their neighborhood. They told police they believed he looked like a burglar who'd been seen on surveillance video.

AP reports that in the Glynn County police report, Gregory McMichael told an officer that Arbery at one point, quote, "began running back the direction from which he came and 'Roddy' attempted to block him which was unsuccessful." Bryan's attorney, Kevin Gough, said Monday that his client didn't play any role in Arbery's death, stating, "Roddie Bryan is not now, and has never been, more than a witness to the shooting. He is not a vigilante. Roddie did not participate in the horrific killing of this young man."

Bryan's video was taken from the driver's seat of a vehicle following Arbery as he ran along a street. Arbery is seen running on the left side of a road with a pickup truck parked in the road in front of him with one of the McMichaels in its bed and the other standing next to the driver's side door. Arbery crosses to pass the truck on the passenger side, then crosses back in front of it. A gunshot is heard, and Arbery and Travis are seen grappling over a shotgun. A second shot is heard as Arbery is seen punching Travis. A third shot is fired, and Arbery staggers and falls face down.

➤CHINA TO MOVE TO PASS NATIONAL SECURITY LAW FOR HONG KONG: China indicated yesterday (May 21st) that it will move forward with a national security law that will target anti-government protests and other dissent in Hong Kong. The proposal, announced ahead of the annual meeting of China's legislature, would undermine the civil liberties that the semiautonomous territory of Hong Kong has had since Britain gave control of it back to China in 1997. The move comes after months of at times violent pro-democracy demonstrations in Hong Kong last year. A U.S. State Department spokesperson criticized the proposal, saying, "Any effort to impose national security legislation that does not reflect the will of the people of Hong Kong would be highly destabilizing, and would be met with strong condemnation from the United States and the international community."
➤WOODS & MANNING TO FACE MICKELSON & BRADY IN 'THE MATCH' THIS SUNDAY: The golf match in which Tiger Woods and Peyton Manning will face off against Phil Mickelson and Tom Brady takes place this Sunday (May 24th) at the Medalist Golf Club in Hobe Sound, Florida. The Match: Champions for Charity, in which the golf pros and NFL quarterbacks will team up, will air beginning at 3 p.m. ET on TNT, TBS, truTV and HLN. Money that's raised will go to coronavirus relief.

➤ESPN SERIES WILL TELL STORY OF BRADY'S NINE SUPER BOWLS: An ESPN series out next year will tell the story of Tom Brady's journey to each of his nine Super Bowls with the New England Patriots, six of which they won. The nine-episode series, called, The Man in the Arena: Tom Brady, will feature a look from Brady's perspective. Brady, who's won more Super Bowls than anyone else, said, "Through the series, we're defining the key moments and challenges that were seemingly insurmountable, but through hard work and perseverance, became career-defining triumphs, in both victory and defeat."
Posted 4:35:00 AM