The pandemic has changed American’s lifestyles more abruptly and deeply than perhaps any event in decades, or perhaps ever. Radio listening is no exception, as millions and millions of people are working from home or no longer working, no longer driving or driving much less, and like so many other part of their lives, up is now down and down is now up.

History will record April 2020 as the lowest radio listening month in our lifetime. Nielsen data tells us that radio tuning during the four weeks of April were under 70% of pre-COVID baseline levels. The glimmer of good news is that the index moved from 67% for the first three weeks of April to 72% for the last week of April and is now up to 82% for the 2nd week of May. Below is a chart provided by Media Monitors from an Inside Radio article. 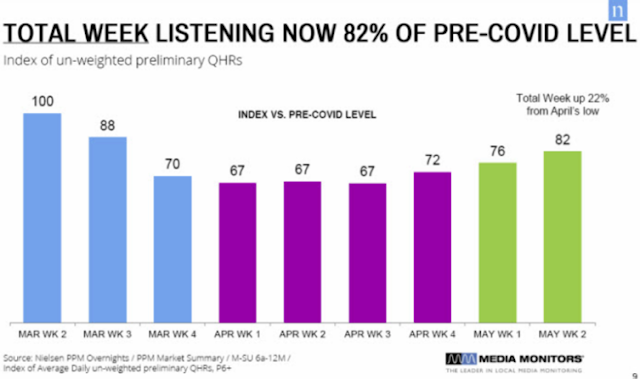 To illustrate, Henry states look no further than public radio stations, which have long suffered from having comparatively small Cume audiences and survive in normal times because of their loyal listeners. During April, tune in levels (Cume) to public radio stations…both news/talk and music… fell dramatically. Yet, the Shares of many if not most of these stations are at unprecedented high-water marks.

If Cume is through the floor then how can Shares be through the roof? Because public radio’s long-time reliance on Core listeners is paying off big time during the pandemic.
Posted 2:07:00 AM