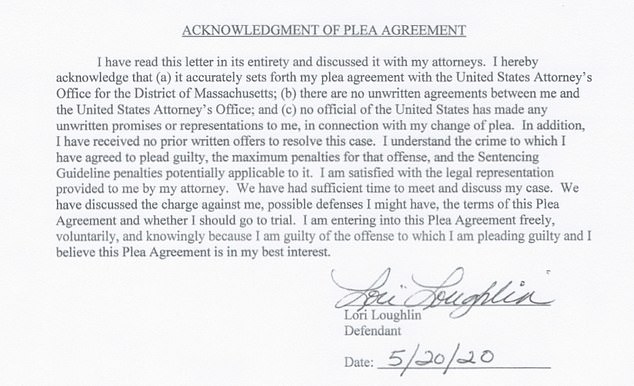 Actress Lori Loughlin, who maintained her innocence for 16 months, will plead guilty to fraud in the college admissions scandal, according to a plea agreement filed in federal court, The L-A Times is reporting.

Loughlin was arrested in March 2019 and charged with conspiring with William “Rick” Singer, a Newport Beach consultant at the heart of the admissions scandal, to pass off her two daughters, Olivia Jade Giannulli and Isabella Rose Giannulli, as promising rowing recruits, all but guaranteeing their admission to USC.

Loughlin and her husband, Mossimo Giannulli, paid Singer $500,000 in all, prosecutors charged. Giannulli has agreed to plead guilty as well, court documents show.

For 16 months, the couple had insisted Singer misled them into believing the money was destined for legitimate university purposes, not bribes to corrupt school employees. Earlier this month, a judge batted down their request to have the charges dismissed for outrageous government misconduct.


The couple began discussing the plot with Singer in April 2016, an FBI agent wrote in an affidavit filed in court. Though neither of their daughters was a rower, Loughlin and Giannulli saw being a coxswain as their ticket into USC, which has an acceptance rate of 13%, the agent wrote.

“I’d like to maybe sit with you after your session with the girls as I have some concerns and want to fully understand the game plan and make sure we have a roadmap for success as it relates to [our daughter] and getting her into a school other than ASU!” Giannulli wrote in an email to Singer, the affidavit said.

Singer told the couple that their daughter’s academic qualifications were “at or just below the low end of USC’s admission,” according to the affidavit.

The couple tapped what Singer called his “side door” into USC: bribing Donna Heinel, an athletics department official, to designate their two daughters as recruited rowers, prosecutors charged. Heinel has pleaded not guilty to conspiracy to commit racketeering, bribery and fraud.

Loughlin and Giannulli’s payments were funneled through Singer’s charity, whose stated mission was to help “underprivileged students,” according to charging documents filed in federal court. The tax-exempt status for Singer’s “Key Worldwide Foundation” allowed some of Singer’s clients to write off bribes as charitable gifts on their taxes, authorities said.
Posted 9:22:00 AM