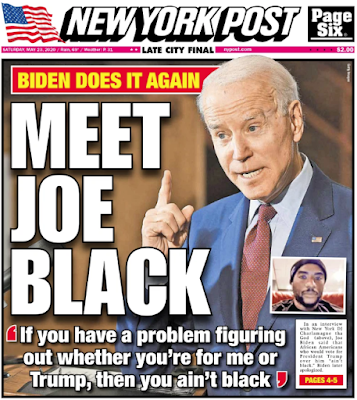 The NY Times reports his remarks came hours after a testy exchange with Charlamagne Tha God, a host on “The Breakfast Club,” iHeartMedia' s nationally syndicated morning show (which originates at WWPR 105.1 NYC) popular with black millennials, that has dominated the conversation online. In the interview, during which the former vice president sidestepped a question about marijuana legalization and his running mate selection, Biden also made clear that he felt there was no reason black Americans would consider voting for Trump.

“If you have a problem figuring out whether you’re for me or Trump then you ain’t black,” Biden said.

The remark sparked immediate pushback on social media, with activists and conservatives jumping on Mr. Biden, 77, for acting as the arbiter of blackness. His words also exposed wounds among Democrats that date to 2016, when many leaders felt the party took black voters for granted“I don’t take it for granted at all,” he said later Friday.

On a call with reporters that was quickly organized by the Trump campaign, a top adviser, Katrina Pierson, and Senator Tim Scott of South Carolina, the only black Republican in the Senate, rapped Biden for the comment.

“Joe Biden has a history of saying dehumanizing things when it comes to black Americans,” Ms. Pierson added.

“This morning, Joe Biden told every single one of us we ‘ain’t black,’” Mr. Scott said. “I’d say I’m surprised, but it’s sadly par for the course for Democrats to take the black community for granted and brow beat those that don’t agree.”

Symone Sanders, a senior adviser for Mr. Biden, later tweeted that the comments were in jest.
Posted 3:53:00 AM