Why Lori Loughlin Made Guilty Pleading

Television star Lori Loughlin and her husband formally pleaded guilty Friday to conspiring with a California college counselor in a $500,000 deal to pass off their two daughters as crew-team recruits to get them into the University of Southern California. 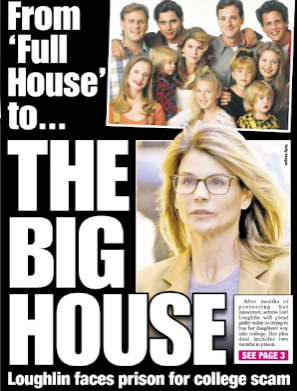 The Wall Street Journal reports the actress and her husband, fashion designer Mossimo Giannulli, entered their pleas by video, reversing fourteen months in which the Los Angeles couple has maintained their innocence in the national college admissions scam.

Their plea agreements, reached with the U.S. Attorney’s Office of Massachusetts, call for two months in prison for Ms. Loughlin and five months for Mr. Giannulli, though U.S. District Judge Nathaniel Gorton still has to officially accept those sentences.

The judge set sentencing dates of Aug. 21, though William Trach, Mr. Giannulli’s lawyer, said the couple would actually like to be sentenced earlier, in late July, in part “to have finality on this process.” The judge said he will consider that request.

As for why the couple decided to plead guilty, a source close to Loughlin tells E! News, "They are ready for it to be over with and to get on with their lives."

"This has ruled their lives and has been hanging over their heads for so long, it has really taken its toll," the insider shares. "They were feeling very concerned about the virus and jail sentences and they are hopeful the court will sentence them appropriately. They want to put this behind them and move on."

"They didn't want to endure the stress of a trial and continue dealing with this on a daily basis. It's time to move on and start over again," the source continues. "They don't know if the judge will sign off or delay their jail time. But they are hopeful and they know there is a chance they will start their sentences and be able to serve at home. They are waiting to find out."
Posted 3:07:00 AM