Phyllis George, who achieved one level of fame as Miss America 1971 and another four years later when CBS hired her as a member of the otherwise all-male cast of “The NFL Today,” died on Thursday in Lexington, Ky.

She was 70, according to The NY Times.

Her family said the cause was polycythemia vera, a rare blood cancer that had been diagnosed 35 years ago.

Hired as a co-host of CBS Sports’s weekly pregame football show — which featured the high-profile hosts Brent Musburger and Irv Cross and the gambling commentator Jimmy Snyder, or Jimmy the Greek, as he was known — George immediately became the most prominent woman in sportscasting.

But with her beauty-queen background and her modest television résumé, she was criticized for lacking the traditional sportscaster credentials. She was not a former sportswriter, like Musburger, and she was obviously not a retired football player, like Cross.

She responded to her critics by saying that she knew enough about sports, especially football, to get by.

And she was unquestionably a pioneer. To many young women who hoped to have careers in sportscasting, seeing her sharing the studio desk with Musburger, Cross and Snyder and discussing the day’s games was inspiring. 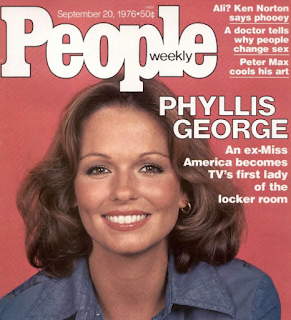 George was best known for her interviews with athletes. A noteworthy moment happened in 1975 when Roger Staubach, the Dallas Cowboys’ stoic quarterback, unexpectedly confessed to her: “I like sex as much as Joe Namath. I just like it with one person, my wife.”

She remained with “The NFL Today” for three seasons before being replaced during the 1978 season by Jayne Kennedy, another former beauty queen. The next year, Ms. George married John Y. Brown Jr., who had built the Kentucky Fried Chicken chain and was elected governor of Kentucky in 1979. She was the first lady of the state for four years.

Phyllis Ann George was born on June 25, 1949, in Denton, Texas.  Her first major job in television was as host of “The New Candid Camera” with Allen Funt in 1974. CBS Sports hired her soon after and began to give her assignments, the most prominent being “The NFL Today.”

Bob Wussler, the president of CBS Sports, said he wanted to hire a woman who would provide a human interest angle that male commentators did not.

“She’s a warm, attractive, very nice individual,” Mr. Wussler told The Sentinel. “She brings the average 25-year-old-lady fan kind of aspect, which I think is important.”

After being replaced by Ms. Kennedy for two seasons, Ms. George returned to “The NFL Today” in 1980 and stayed until 1984. Early the next year, she replaced Diane Sawyer as an anchor of “The CBS Morning News” with Bill Kurtis. She was again criticized, this time for not having a journalism background. After eight months, she resigned.
Posted 1:04:00 AM