The Infinite Dial Australia 2020 study released today by Edison Research shows 82% of Australians aged 12 and over listened to radio over the air, online or via catch-up podcasts in the last week, holding steady with last year’s 83% figure.

Radio Info reports the research was conducted in the first quarter of 2020, prior to the lockdowns from the COVID-19 pandemic, and is a nationally representative telephone survey of 1,014 people aged 12 and older, with data weighted to national 12+ population figures.

Twelve per cent of the population listened to radio online in the last week, up from 10% a year ago.

Weekly podcast listeners listened to six podcasts per week on average. Smartphones and tablets were the devices used most often to listen to podcasts – with 85% listening this way versus 11% using a computer. 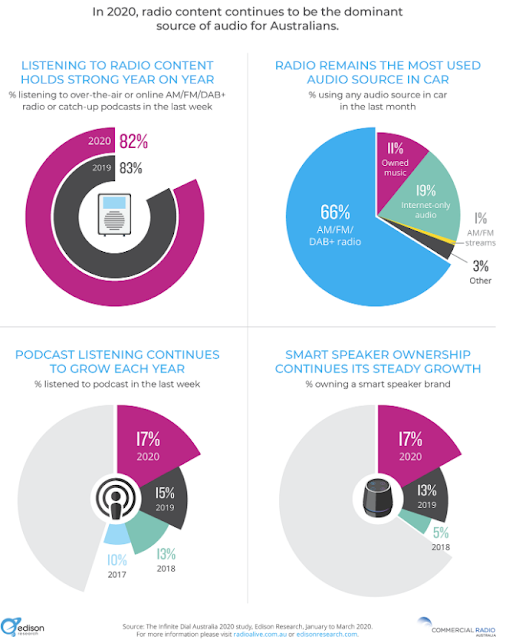 Edison Research president Larry Rosin, said it was possible that Australians had yet to be exposed to enough bespoke podcasting that was more relevant to the population, and that Catch Up Radio podcasting was probably more successful here because of Australians bigger radio consumption.