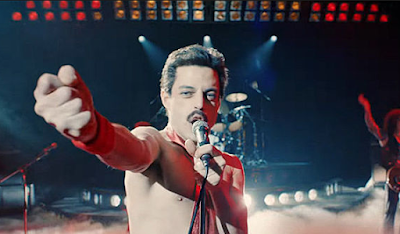 iHeartMedia has announced it will celebrate the release of the Twentieth Century Fox and Regency Enterprises film, “Bohemian Rhapsody,” about the life of iconic rock band, Queen with a first ever nationwide song roadblock on November 1 at 9 a.m. across more than 650 iHeartMedia music stations and websites nationwide.

As part of the largest song roadblock in history, all 650-plus iHeartMedia music stations and websites nationwide will play an entire six-minute version of Queen’s iconic hit song, “Bohemian Rhapsody,” at 9 a.m. local time, providing unprecedented instant awareness for the film’s November 2 release.

In addition, iHeartMedia has enlisted some of the biggest names in music to share special tributes about how Queen impacted their music careers and lives on iHeartRadio.com/BohemianRhapsody. Local iHeartMedia stations throughout the country will also air promos and brand spots to count down the days until “Bohemian Rhapsody” is in theaters and remind fans about the roadblock. The promotion will also include an all-day digital takeover across the iHeartRadio network, including iHeart.com and station websites, featuring streaming audio and banners.

“There’s an amazing moment in ‘Bohemian Rhapsody’ where the executive at EMI Records, Ray Foster, says that radio will never play ‘Bohemian Rhapsody’ because it’s too long,” said Tom Poleman, Chief Programming Officer for iHeartMedia. “He obviously was wrong. We’re thrilled to help celebrate Queen and this incredible film with a first-ever massive roadblock that only a company with iHeartMedia’s unparalleled reach could achieve.”

Bohemian Rhapsody is a celebration of Queen, their music and their extraordinary lead singer Freddie Mercury. Freddie defied stereotypes and shattered convention to become one of the most beloved entertainers on the planet. The film traces the meteoric rise of the band through their iconic songs and revolutionary sound. They reach unparalleled success, but in an unexpected turn Freddie, surrounded by darker influences, shuns Queen in pursuit of his solo career.

Having suffered greatly without the collaboration of Queen, Freddie manages to reunite with his bandmates just in time for Live Aid. While bravely facing a recent AIDS diagnosis, Freddie leads the band in one of the greatest performances in the history of rock music. Queen cements a legacy that continues to inspire outsiders, dreamers and music lovers to this day.
Posted 3:11:00 AM