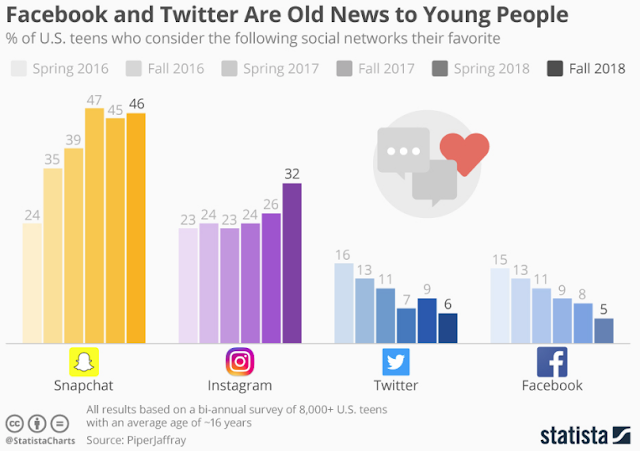 There new evidence that when it comes to their social media preferences, U.S. teens are about as loyal as Brutus was to Caesar. Back in 2013, Facebook was their social network of choice. In 2014, Instagram took the throne for a while before being replaced by Snapchat in 2016.

Now, in the fall of 2018, Snapchat is still the number 1 for teens in the United States, but Instagram is making up ground, according to Statista.

According to the latest edition of PiperJaffray’s bi-annual “Taking Stock With Teens” survey, 46 percent of the 8,600 teenagers polled named Snapchat their favorite social media platform, while 32 percent of the respondents picked Instagram as their platform of choice. In terms of usage, Instagram even surpassed Snapchat for the first time, with 85 percent of teenagers using it at least once a month compared to 84 percent for Snapchat.

The popularity of Snapchat and Instagram clearly comes at the expense of Facebook and Twitter, which seem to be less and less appealing to the teenage demographic, according to Statista's Felix Richter.
Posted 3:07:00 AM