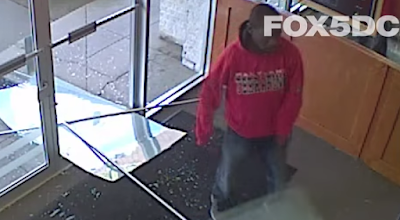 A suspected intruder who was shot after kicking down the glass doors at WTTG FOX 5’s building in D.C. on Monday was known to both Fox executives and police, according to sources, and had leveled threats against both previously.

D.C. police responded to the building on Wisconsin Avenue in the Friendship Heights neighborhood as officials say the man had been shot in the station's lobby by an armed security guard after forcing his way through the glass doors at around 3:07 p.m. The suspect's entry into the building was captured on surveillance video from inside and outside of the entrance to the lobby area.

After entering the lobby, the suspect, identified as 38-year-old George Odemns, started walking directly towards the desk station in the direction of the main part of the building, according to the police report. The security guard drew her weapon and told the suspect he could not continue walking further into the building before shooting him once in the chest.

Odemns was taken out of on a stretcher and placed into an ambulance following the shooting. Police say he was taken to George Washington University Hospital in critical, but stable condition.

He was charged with second-degree burglary, officials say.

All of the employees at FOX 5 are safe following the incident.


One of the security guards involved in the incident told FOX 5 that she and a fellow guard told the suspect to back up, but he refused. She says she sprayed him with mace and when that didn’t stop him, the second guard shot him once in the upper body.

The man is suspected to have mental health issues, D.C. police say.

Police continue to investigate the incident.
Posted 3:38:00 AM