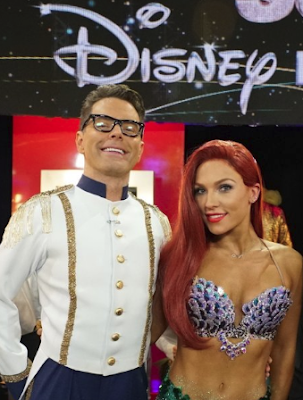 Bobby Bones jumped from MC Hammer’s hammer time to under the sea with Ariel this week on Dancing With the Stars in honor of Disney week.

He and partner Sharna Burgess tackled a “Little Mermaid”-themed waltz Monday on “Dancing with the Stars.” Bones worked all week to deliver his best Prince Eric for the proper dance. The pair danced to “Part of Your World.”

“What I want for us this week is to the complete opposite we of what we did with MC Hammer,” Burgess told Bones. “We need elegance. We need grace, and we need technique.”

Bones earned three sevens from the judges for a total of 21 out of 30. While his scores rank near the bottom of the scoreboard, the country radio personality said he hopes “we’re near the top of America’s heart.”


Before the dance, Burgess explained how hard Bones has to work to learn each dance. Since those rehearsals happen behind closed doors, she said people don’t see his enormous effort.

“He’s starting from square one,” Burgess said. “He knows nothing about dancing. He’s had the most growth this season of anybody. He’s constantly trying to get better at this.”

Monday night Len Goodman told Bones the waltz was “pretty well done” and he admired that Bones “played it straight.” Bruno Tonioli called it a “brave effort.” And Carrie Ann Inaba said she could see Bones’s improvement. Then, she explained his joy at being on the dance floor got in the way of his form.

In honor of Disney week, no one was eliminated from the show.
Posted 3:40:00 AM