UPDATED 4:00 AM 12/29/18: Chris Burrous, an anchor on KTLA 5’s “Morning News,” died Thursday after Glendale police found him unresponsive in a motel room. He was 43, according to The L-A Times.

Police were called to a room at the Days Inn about 1:15 p.m. Thursday, where they found Burrous not breathing, the Glendale Police Department said. Paramedics took him to a hospital, where he died.

Detectives are investigating the incident and Los Angeles County coroner’s officials will determine a cause of death.

In a statement, Don Corsini, president and general manager of KTLA, and Jason Ball, the station’s news director, remembered the anchor as a “great journalist and a wonderful friend to many.”

“Our thoughts and prayers go out to the Burrous family. Chris loved sharing the stories of Southern California and connecting with our viewers,” the statement said. “He brought a kindness to his work and will be deeply missed by the entire KTLA family.”


There are no words. When we took this picture during our show I had no idea it would our last time together. You made me laugh until I cried. My tears now are for your sweet little girl, your wife Mai and your dear parents. We will miss you so... pic.twitter.com/nkvtrzHcX3
— Lynette Romero (@LynetteRomero) December 28, 2018

Burrous was found unresponsive at a Glendale Days Inn on Thursday afternoon after a man he was with called police to report that he was passed out and possibly not breathing, Glendale police Sgt. Dan Suttles said in a news briefing.

First responders found Burrous inside a room suffering from a medical emergency — and the other man, who Suttles said “appears to be a friend,” was already administering aid, the station reported. 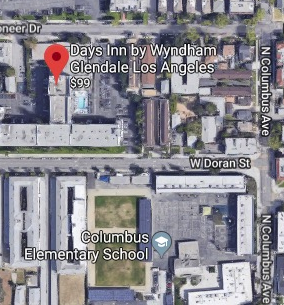 The man stayed at the scene and “quite honestly did a good job of trying to render aid,” he added.

The friend had indicated Burrous had possibly overdosed.

During his time at KTLA, he helped extend its Morning News segment to seven days a week, anchoring weekends and covering breaking news on weekday mornings. He also highlighted Southern California’s best hole-in-the-wall eateries in his weekend Burrous’ Bites segments.

Burrous helped lead coverage on the region’s devastating wildfires, as well as the mass shooting at the Borderline Bar & Grill in Thousand Oaks, the station said.

He was married to Mai Do Burrous, a fellow journalist, and the couple shares a 9-year-old daughter, Isabella.

Burrous had been a regular on KTLA’s air since 2011, according to Variety. He was co-anchor of the weekend edition of “KTLA Morning News” and also served as a news correspondent for other KTLA telecasts. Burrous was recently part of the KTLA team that covered the state’s devastating wildfires last month and the mass shooting at Thousand Oaks’ Borderline Bar & Grill.

Burrous was also known for his “Burrous Bites” segment spotlighting local eateries, and for his “Made in California” series of reports on local businesses.

Burrous came to Tribune Media’s KTLA after serving as an anchor for Tribune’s WPIX-TV New York. He began his broadcasting career while attending Chapman University in Orange County. He worked for radio stations in San Bernardino and San Jose before seguing to TV as an evening anchor on KEVN-TV, the Fox affiliate in Rapid City, South Dakota.

From South Dakota Burrous returned to California in 1999 as an anchor for KGET-TV in Bakersfield and later worked for KGPE-TV in Fresno. He then spent six years in the Golden State’s capital as anchor for KMAX-TV’s “Good Day Sacramento.”