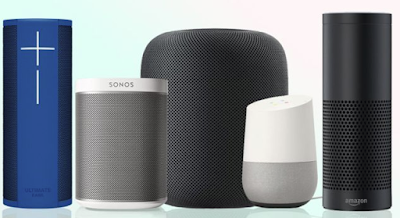 Amazon Echo may once have been marketed as the ideal kitchen speaker, but a new survey from Adobe Analytics shows that smart speakers are increasingly invading the living room. 63% smart speaker owners surveyed by the company said that they have a smart speaker in their living room, followed by 42% who have one in their bedroom and 37% who have such a device in their kitchen.

These findings have some major implications both on the types of smart devices that are being marketed to consumers, as well as the ways consumers are using them. For one thing, the growing use of smart speakers in living rooms seems to validate an increased focus on sound quality by major manufacturers over the last several months.

This included Apple’s entrance into the market with its HomePod, which is heavily focused on audio quality; Amazon’s introduction of better-sounding Echo speakers and equipment to bring the Alexa assistant to existing Hi-Fi audio systems; Sonos decision to position itself as the smart speaker maker for music lovers; and Google’s introduction of the Home Max speaker.

The increased use of smart speakers in the living room should also lead to further integrations with TV sets. Already, a number of manufacturers have begun to let Amazon’s Alexa and the Google Assistant control TV playback.

But the growing popularity of smart speakers in living rooms could also lead to new use cases for these types of devices around communal and entertainment experiences. “We see an opportunity to grow an entire industry of voice-based games for groups of friends having a get-together, or parents looking for an activity for their child,” said Adobe Analytics group manager Heidi Besik. Already, 20% of smart speaker owners have used their devices to play games, and 64% of these smart speaker gamers do this at least once a day, according to the survey.

Adobe has been querying consumers about smart speakers for some time. The company’s newest report indicates that smart speakers are a gateway for voice technology in general, with 72% of smart speaker owners believing that voice technology works well. Among non-owners, who presumably access smart assistants via their phones, that belief is only shared by 38% of survey respondents. What’s more, 58% of smart speaker owners use voice to access the internet or control devices every day; among non-owners, that number is just 24%.

Smart speakers are most often used to listen to music, check the weather and set alarms, but news consumption is quickly catching up, according to Adobe’s survey. 46% of smart speaker users check the news with their device, and 77% of that group query their speaker for news at least once a day.
Posted 2:22:00 AM