Lawmakers Insist MbS Has Got To Go 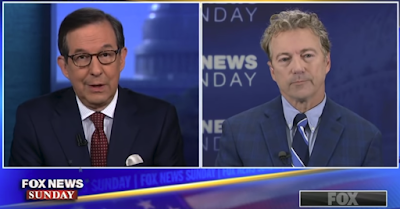 The Saudi government's overnight announcement that Washington Post contributor Jamal Khashoggi died in a fistfight at its consulate in Turkey was "insulting," and provided another reason Crown Prince Mohammad Bin Salman is "gonna have to be replaced," Sen. Rand Paul, R-Ky., told Fox News Sunday.

"I think it’s insulting to anyone who’s analyzing this with any kind of intelligent background to think that, oh, a fistfight led to a dismemberment with a bone saw," Paul said, referring to unconfirmed reports that the Saudi squad at the embassy included a man toting a bone saw. (Nebraska Republican Sen. Ben Sasse similarly told CNN's "State of the Union" on Sunday that "you don't bring a bone saw to an accidental fist fight. ... The Saudis have said a whole bunch of crap that's not right, accurate, or true.")


Paul added: "I think we should put this brazen attack, this brazen murder in context with Saudi Arabia. Saudi Arabia has basically over the decades been the largest state sponsor of radical Islam and violent jihad. They sponsor thousands of madrassas that teach hatred of Christians and Jews and Hindus around the world. So this isn’t the first instance, this is just another in the line of long instances of Saudi insults to the civilized world."

The Kentucky senator said the solution was for new leadership in Saudi Arabia -- a proposal echoed by Sen. Lindsey Graham, R-S.C., who said on Fox News last week that Crown Prince Mohammad Bin Salman "has got to go."
Posted 3:39:00 AM