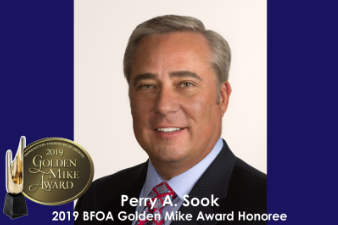 The Broadcasters Foundation of America announced Monday that Perry A. Sook – Founder, Chairman, President and Chief Executive Officer of Nexstar Media Group -- will receive the 2019 Golden Mike Award on Wednesday, March 6, 2019, at the Plaza Hotel in New York City.

The annual black-tie gala is a major fundraiser for the Broadcasters Foundation, the only charity devoted exclusively to helping broadcasters in acute need.

“There is no greater testament to broadcasters’ commitment to public service than in times of emergency. From hurricanes to wildfires, news teams across the country consistently brave extremely dangerous conditions to deliver lifesaving news coverage and information to local communities,” observed Mr. Sook.

“Many of us at Nexstar have experienced firsthand the devastating effects and extensive damage caused by severe weather and other unforeseen events. That is why we are proud to support the important work of the Broadcasters Foundation in providing both one-time emergency aid and ongoing monthly grants to help our colleagues most in need. I would like to thank Dan Mason and the Broadcasters Foundation for this prestigious Golden Mike Award and the more than 9,000 Nexstar employees who share in this great honor, for the work they do each day to make a positive difference in their local communities.”

“Perry has led the growth of Nexstar with vision and resolve that has benefited the entire television industry,” stated Dan Mason, Chairman of the Broadcasters Foundation. “As a member of our Board, he has championed our mission of helping broadcasters in acute need and spread the word about the assistance we can provide. He is admired among his colleagues, and it is a privilege to honor him.”

Sook has over 38 years of professional experience in the television and radio broadcasting industries, covering all facets of the business including ownership and M&A, management, sales, on-air talent and news. He founded Nexstar in 1996 with one local television station in Scranton, PA and began building the foundation of what is today the second largest local broadcast television company in the United States, with 171 stations reaching 100 markets and annual revenue in excess of $2.3 billion.

The Broadcasters Foundation of America Golden Mike Award dinner attracts a who’s who of broadcast media executives and celebrities. The presenters and performers for this year’s event will be announced shortly. Previous recipients include Emily Barr, David Barrett, Michael Bloomberg, Bob Pittman, Gordon Smith, Jeff Smulyan, and more. For information, or to reserve a seat or table, please contact the Broadcasters Foundation at 212-373-8250 or info@thebfoa.org.

The Broadcasters Foundation has distributed millions of dollars in aid to broadcasters who have lost their livelihood through a catastrophic event, debilitating disease or unforeseen tragedy.
Posted 3:23:00 AM