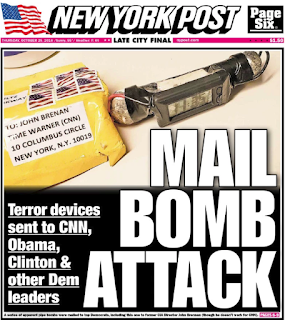 The pipe bomb sent to CNN’s Midtown headquarters Wednesday had an ISIS parody flag reading “Get ‘Er Done” on it, a high-ranking police source told The NYPost.

The mock flag appears to be one that has been lurking on the right-wing corners of the internet as a meme since 2014.

It replaces Arabic characters with the suggestive silhouettes of three women and the words “Get ‘Er Done” — which is the catchphrase of stand-up comic Larry the Cable Guy.

The image was originally created by the right-wing parody site World News Bureau for an article titled “ISIS Vows Retribution For Counterfeit Flags,” according to NBC News.

Based on a picture of the bomb obtained by CNN, there appears to be the image of a face next to the mock flag. The identity of the person in that picture is still unknown.

The bomb sent to CNN, and addressed to former CIA Director John Brennan, is one of many makeshift bombs sent to a number of prominent Democrats — including former President Barack Obama and Hillary Clinton.

CNN President Jeff Zucker chided President Donald Trump and White House Press Secretary Sarah Huckabee Sanders for their attacks on the media, after the cable news network was the target of an anonymous package containing an explosive device on Wednesday morning.

“There is a total and complete lack of understanding at the White House about the seriousness of their continued attacks on the media,” Zucker said. “The president, and especially the White House press secretary, should understand their words matter. Thus far, they have shown no comprehension of that.”
Posted 3:55:00 AM