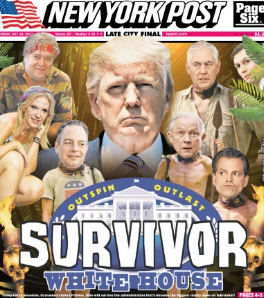 According to Reuters, Scaramucci blasted White House chief of staff Reince Priebus and Trump's chief strategist, Steve Bannon, in an article in The New Yorker based on a telephone conversation on Wednesday night between one of the magazine's correspondents and Scaramucci.

Amid a stream of vulgar language, the former Wall Street financier named to the communications post last Friday called Priebus a "fucking paranoid schizophrenic" and accused Bannon of trying to build his own brand "off the f#%king strength of the president."

In a Twitter message after the article appeared online, Scaramucci said:


I sometimes use colorful language. I will refrain in this arena but not give up the passionate fight for @realDonaldTrump's agenda. #MAGA
— Anthony Scaramucci (@Scaramucci) July 27, 2017

Asked about the article, White House press secretary Sarah Sanders said the administration was focused on healthcare and other items.

"He used some colorful language that I don't anticipate he'll do again," she told reporters. Any apology "needs to happen personally between them," she said.