It was a tight race, but Leff in Laguna was crowned the winner of this year’s “Smack Off,” Jim Rome’s annual CBS Sports Radio show celebrating sports radio smack talk. This is Leff’s second consecutive win, scoring him $5,000 and eternal bragging rights.

Once again, Leff in Laguna showed up at Rome’s studio in Irvine, Calif. This year, the 2016 champion recreated a 1996 Sports Illustrated photoshoot with other diehard Clones. Leff rounded up the original group, some of whom haven’t been heard from in years. 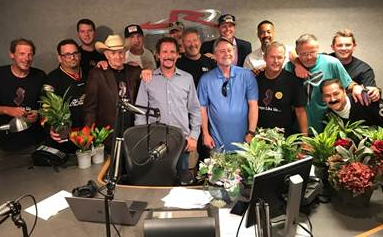 Left to right: Irie Craig, Rich in Anaheim Hills, Benny in Wisco (Back), Trapper in Dana Point, Silk in Huntington Beach (Behind), Jim Rome, Joe in Lemon Grove (Way Back), Pat the CEO in So Cal (Middle), Coach Tom, Rich Flores (Back), Jim Benton, Kerwin in Riverside (Back), Terrance in Sierra Madre, Leff in Laguna Smack-Off Champion (Back), Randel in the OC playing Raider Mike

Jim Rome commented, “This was the best Smack Off ever and the toughest one to decide a winner, but Leff in Laguna won it with a great call that somehow included an incredible in-studio reunion of the guys from the 1996 SI photo shoot. Truly an amazing moment in show history and one that I will remember forever.”

Rome has been the outspoken host of “The Jim Rome Show” since the launch of CBS Sports Radio in January 2013, broadcasting live weekdays from 12:00-3:00 PM, ET. A one-hour highlight version of the show, titled “Jim Rome’s Daily Jungle,” is available as a daily podcast exclusively on CBS RADIO’s Play.it network. Rome also anchors three editions of the early afternoon broadcast of the network’s flagship feature the “CBS Sports Minute,” heard on hundreds of stations nationwide including WFAN (New York), WSCR (Chicago) and WIP (Philadelphia).
Posted 5:14:00 AM