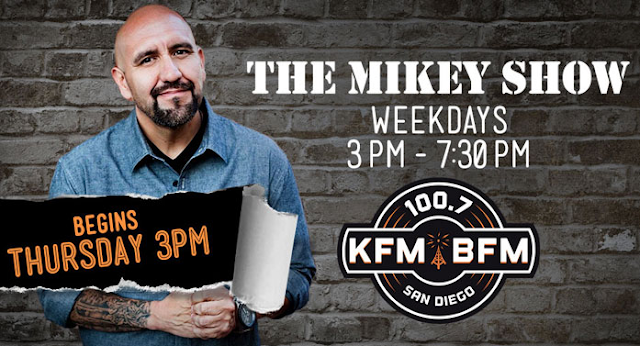 100.7 KFMB-FM has announced the addition of "The Mikey Show" with Mikey Esparza to its programming line-up in afternoon drive from 3:00 PM-7:30 PM beginning Thursday, July 27th.

Esparza began his radio career 30 years ago at KFOX/Tucson and has cracked the mic in several other markets like Monterey, San Jose, Dallas and San Diego. He was last on the air in San Diego doing mornings at KBZT, which followed his run at KIOZ. After leaving KBZT he hosted a nationally syndicated show called "Rock All Night."

Program Director, Mike V. Vasquez, says "Mikey's passion for creating compelling content and his love of rock and roll make him the ideal choice to entertain San Diego during the afternoon commute. With The DSC entertaining our fans in the morning, the legendary Robin Roth rockin' the workday and The Mikey Show on the drive home, KFM-BFM is committed to delivering quality programming."

Esparza commented, "I feel like a kid on Christmas morning. I'm blessed to be a part of such a great station with such a cool staff! I can't wait to rock people on their drive home."

Lastly, with The Mikey Show taking over the afternoon slot, Mike V. will move to nights from 7:30 PM-12:00 AM.