Democrats singled out the AT&T-Time Warner merger in their new messaging campaign on Monday, signaling a tougher stance on policing corporate consolidation, according to The Hill.

In a set of documents posted by House Minority Leader Nancy Pelosi (D-Calif.), the Democrats laid out their "Better Deal" vision of cracking down on "extensive concentration of power" in a number of industries, including the cable and telecom fields.

"Consolidation in the telecommunications is not just between cable or phone providers; increasingly, large firms are trying to buy up content providers," the document reads. "Currently, AT&T is trying to buy Time Warner. If AT&T succeeds in this deal, it will have more power to restrict the content access of its 135 million wireless and 25.5 million pay-TV subscribers.

"This will only enable the resulting behemoths to promote their own programming, unfairly discriminate against other distributers [sic] and their ability to offer highly desired content, and further restrict small businesses from successfully competing in the market."

Democrats have been speaking out against the $85 billion deal since it was announced last October. Though it is widely expected to be approved by the Justice Department in the coming months, the merger has had to navigate a number of political obstacles, including early opposition on the campaign trail from President Trump. 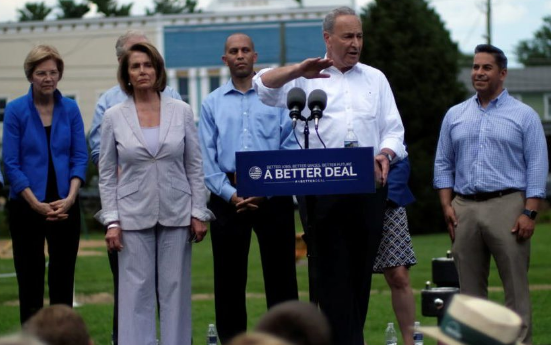 At a rally in Berryville, Va., Warren explained why pushing for stronger antitrust rules will be a pillar of the Democrats’ new “Better Deal” initiative ahead of the 2018 midterm elections. She said consolidation leads to companies that “put the squeeze on wages” while profits rise, making it easier for businesses to claim lobbying victories in Washington.

“This kind of concentration matters,” Warren said. “It matters because giant corporations crush competition. They shut out young rivals and they kill startups.”

According to the Morning Consult, Warren — who has railed against the size and corporate behavior of financial institutions like JPMorgan Chase & Co. and Goldman Sachs Group Inc. throughout her political career — also criticized the airline, food and health insurance industries.

“Corporate influence over our government has gotten worse under the Trump administration,” Warren said. “President Trump has stacked his administration with a who’s who of big-time lobbyists, Wall Street bankers and corporate executives.”
Posted 3:15:00 AM