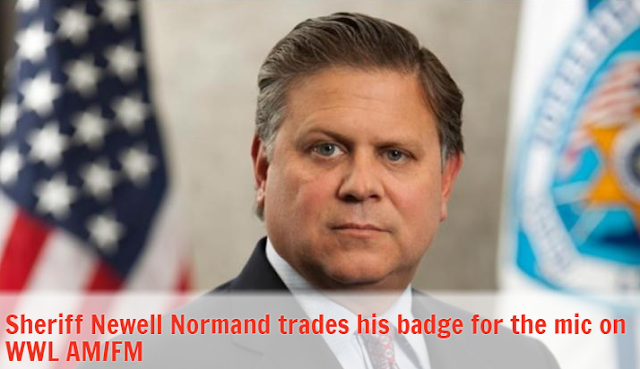 Sheriff Newell Normand is trading his badge, 40 years in law enforcement and 37 years with the Jefferson Parish Sheriff’s Office for the microphone and a new challenge – host of WWL Radio’s midday show left vacant when Garland Robinette retired.

“It was a tough decision, because I love my work, my officers and the people of Jefferson parish, but this is an opportunity I couldn’t pass up,” said an excited Normand. “I always listened to Garland and admired his voice in our community. He played a pivotal role in New Orleans’ recovery & rebirth from Katrina. Plus, good leaders know when it’s time to move on. I’m satisfied that Jefferson Parish is in great shape. The crime rate hasn’t been this low since 1974. And strong leadership is ready to step in and take over a great team – one I care about deeply and will miss dearly,” continued Normand. Newell Normand was elected sheriff 3 times and sustained approval ratings of 92%, 91% and 88%.

Why radio? “This allows me to lead in a different way,” said Normand. “These are volatile times. People don’t know what to believe, who to trust, where to turn. I’d like to help cut through the confusion and fog. I have a unique perspective, and WWL radio is a huge stage with so many platforms to reach people. Together we can be a strong force for good. My goal is simply that–to be the voice of positive change. Same mission as a sheriff… different venue. We’ll not only make honest assessments of our cities, state and country, but our leaders. And, yes, we’ll ask questions…but anybody who knows me knows this…we’ll demand answers,” said Sheriff Normand.

Why Newell? “He’s an extraordinary leader and a good man. Newell Normand’s opinion matters. When he talks everybody listens,” says Chris Claus VP/GM of Entercom Communica-tions New Orleans. “We knew Garland’s replacement had to be someone special. Someone with strong opinions, great intellect…someone who earned the respect, not just of the citizens in our community, but leaders too.”

How did this union happen? “I can honestly say we surprised Sheriff Normand,” said Diane Newman, WWL Operations and Program Director. “Called him out of the blue one day & asked if he’d consider a career change. It was a long shot – he’s one of our most popular and effective leaders—a powerful man with one powerful voice. But, just as Garland always seemed bigger than the box called television, Newell always seemed more than the uniform. His voice will be amplified behind the WWL mic, allowing him and us to make even deeper connections with our community. There are sides to Newell Normand that most people don’t know. This show will give him room to expand – to display not just his unmatched smarts & institutional knowledge, but that passion & love of community that he always had to reign in as sheriff. Talent as big as the stage,” declared Newman.

And what does recently-retired Garland Robinette think about his replacement? “He’s an inspired choice,” said Robinette. “I honestly thought there was no way they could pull it off. Sheriff Newell Normand is one of the most powerful people in Louisiana. Many thought he’d be governor one day. Law enforcement around the country admire and consult this man. My response to this news, honestly, is WOW! Newell will be a compelling host & a magnet for great guests. Everybody’s going to want to be on that show. Everybody’s going to listen. I know I will,” smiled Robinette.

“There’s a lot I have to unwind, now that the secret’s out. I want to leave the sheriff’s office & parish clicking on all cylinders,” explained Normand.
Posted 3:46:00 AM