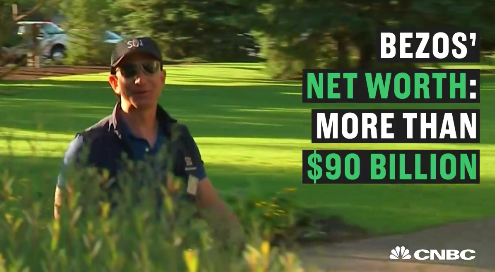 Jeff Bezos was the richest man in the world for a time on Wednesday, with a fortune of over $90 billion.

Even if Bezos didn't end the day as the richest man, he will likely take the crown from Gates more permanently in the coming days and weeks.

When he hits the mark, Bezos, who started selling books from his garage 22 years ago, becomes the first man to bump Gates from his perch in seven years and is only the sixth man to hold the "richest person" title in the past 30 years, according to Forbes.

Bezos' rise carries important symbolic weight — signaling Amazon's unbridled power and value, presenting a new face of outsized wealth to the world and heralding a new kind of billionaire who is skeptical of philanthropy and has massive reach in culture, technology and media. Bezos will be a stark contrast to his fellow Seattle-area resident Gates, who has topped the list for much of the past quarter-century and devotes his time and money to philanthropy.

Jeff Bezos is the world’s richest person from CNBC.

What's most astounding about Bezos' rise is his recent wealth surge. He has been a billionaire for nearly 20 years, first making the Forbes list in 1998 with a net worth of $1.6 billion after Amazon's IPO. He chugged along for the following decade, reaching $4.4 billion in 2007, gradually rising to $18.4 billion by 2012, ranking him 26th on the list.

But over the past two years, as Amazon's stock has soared, so has Bezos' fortune.
Posted 4:04:00 AM