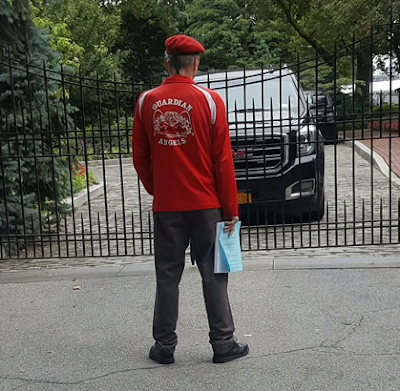 According to The NYPost, the outspoken Sliwa was given a desk-appearance ticket for disorderly conduct for attempting to toss the court papers at de Blasio’s motorcade around 8:30 a.m.

“He ordered them to cuff me and arrest me and called for cop cars from the 19th Precinct. You would have thought I was Pablo Shorty Guzman,” Sliwa told reporters after he was released from the 19th Precinct, in an apparent reference to jailed Mexican drug lord Joaquin “El Chapo” Guzman. “There were 20 officers and four cars.”

Sliwa claimed he was able to throw the suit — which seeks to have de Blasio removed from the Working Families Party ticket on a technicality — at the mayor’s car as he took off from Gracie.

“I yelled, ‘I’m serving you, Mr. Mayor,'” said Sliwa, who also plans to sue Public Advocate Letitia James and city Comptroller Scott Stringer. “That’s why we are serving them because they shouldn’t be on the ballot either if they are going to knock off our candidates.”

The paperwork Sliwa was trying to serve de Blasio was related to the Reform Party’s attempt to get de Blasio and some other candidates off the Working Families Party ballot line after claiming that city election rules had been violated in how the candidate were selected.

A spokesman for the NYPD reportedly said in a statement that “Sliwa refused to move from the road and attempted to interfere with the departure of the motorcade. Sliwa was physically removed and charged with disorderly conduct.”

Upon his release, Sliwa has asked Eboni K Williams, a licensed attorney and co-host of “The Curtis and Eboni Show” on WABC, to represent him in his upcoming court appearance.
Posted 4:04:00 AM