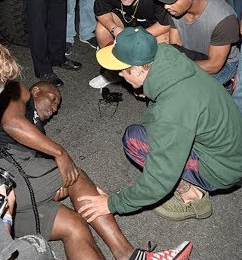 Justin Bieber accidentally hit a photographer with his truck after leaving a Beverly Hills church service, and the singer got out to help the man while waiting for emergency services to arrive.

The photographer, who was not identified, suffered non-life threatening injuries in the accident on Wednesday night, Beverly Hills police said. The photographer later posted a video thanking the "Sorry" singer for his help.

"He (Bieber) got out, he was compassionate. He's a good kid. Accidents happen," the photographer said in a video posted on celebrity website TMZ.

The accident happened as Bieber, 23, was pulling out of parking lot following a church service. The singer, who started attending church services some two years ago, has been trailed by celebrity media since suddenly canceling the remainder of his world tour on Monday, saying he needed to rest.

"I can't see when you guys are all snapping," Bieber told the photographers, in video of the incident posted to TMZ. Bieber was also seen kneeling down to tend to the photographer, who said his leg was injured.
Posted 3:10:00 AM