Viacom Inc has informed Scripps Networks Interactive it is willing to pay all cash to acquire the U.S. TV network operator, sources familiar with the matter said on Tuesday.

According to Reuters, the move by Viacom, which had $12.17 billion in debt as of March 31, could potentially mean that the $14.3 billion media company would lose its investment-grade status to buy the $10.6 billion Scripps. Last year Moody's downgraded Viacom's debt to the lowest level of investment grade - a status they would likely lose as a result of the deal.

Viacom is bidding for Scripps, which owns channels such as HGTV, Food Network and Travel Channel, against Discovery Communications, which is not expected to make an all-cash bid, according to the sources, all of whom wished to remain anonymous because they are not permitted to speak to the media.

Making an all-cash bid would mark an aggressive move for Viacom Chief Executive Bob Bakish, who has pledged to turn around the struggling media company, which owns MTV, Nickelodeon and Paramount Pictures. 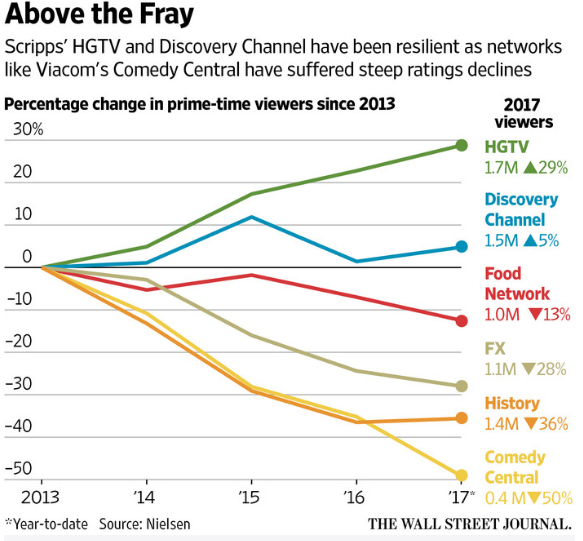 By acquiring Scripps, Viacom can gain cost savings and scale. Larger programmers are thought to have more leverage in negotiations with cable and satellite providers to carry their shows.

Viacom has been talking to cable and satellite companies about launching a so-called skinny bundle of non-sports networks for less than $20 per month. By acquiring Scripps programming, Viacom has more to offer its pay TV partners for such a bundle.
Posted 3:34:00 AM