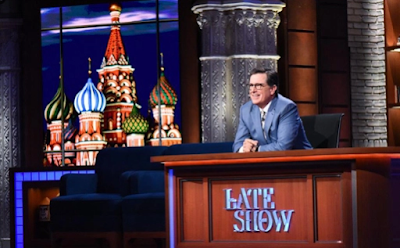 “The Late Show With Stephen Colbert” scored its biggest margin of victory in total viewers ever thanks to the CBS late-night show’s “Russia Week” for the frame ending July 21.

According to Variety, the week of shows covered the host’s recent trip to St. Petersburg and Moscow. It won the week in viewers by its largest margin since the show’s premiere in September of 2015, according to Nielsen live-plus-same-day ratings, with an average of 2.87 million viewers per episode. The show topped “The Tonight Show Starring Jimmy Fallon” by 450,000 viewers for the week, with the “Tonight Show” averaging 2.42 million viewers per episode. “The Late Show” was also up 14% compared to the same week last year.

Colbert and Fallon have been battling it out in the ratings for months, with Colbert’s total viewer numbers surging ever since Donald Trump’s election.
Posted 3:13:00 AM